Seoul determined to be design capital

Seoul determined to be design capital 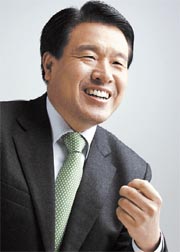 Unlike predecessors, Seoul Mayor Oh Se-hoon said in his inaugural address in July 2006 that he would focus on transforming Seoul into a world-class landmark design capital to be on par with the world’s top design cities - New York, London, Milan and Sydney.

More than three years have passed since Oh took his post and the city appears to be off to a good start.

Seoul won the bid to become the first host city of World Design Capital 2010 to showcase its ongoing design policies and projects.

On New Year’s Eve, Mayor Oh rang a bell in the Bosingak Pavillion and marked the start of “WDC Seoul 2010.”

Several start-up events related to the World Design Capital Seoul 2010 began at the end of last year, and Seoul is busily preparing for the WDC World Design Cities Summit slated for Feb. 23 and 24.

Mayors of 20 cities and design experts will convene here to discuss and exchange ideas on design policies.

Under the policies mapped out by the aesthetically-oriented mayor and his design experts, the capital of the world’s 15th largest economy - little known for its design - surprised many after it was ranked No. 3 in The New York Times January article “The 31 Places to Go in 2010.”

Surprisingly, it wasn’t food, tourist attractions or cultural heritage assets that landed Seoul the No. 3 spot.

The Times said the primary reason for Seoul’s designation was design.

“Forget Tokyo,” the article said. “Design aficionados are now heading to Seoul.” The article then mentioned the 2010 World Design Capital that the city is hosting.

Seoul is the first city in the world to host the event after a pilot program in Turin, Italy.

In an interview with the JoongAng Daily, Chung Kyung-won, the chief design officer of the Seoul Metropolitan Government’s Design Seoul Headquarters, who suggested Mayor Oh make a bid to host the event, said design is not a luxury but a must-have policy that Seoul should pursue to generate economic, social and cultural benefits.

“Seoul had to follow design trends of other developed cities like Milan, Paris and New York, but hosting the WDC will be a cornerstone to transform the city into a ‘design trendsetter,’” Chung said.

“Shortly after The New York Times story about Seoul’s design-frenzy, Wallpaper, a renowned British design magazine, nominated Seoul as one of five candidate cities for its Design Awards Best City 2010 together with Berlin, Istanbul, New York and Rotterdam,” Chung said. “Though New York was selected as the best city winner, this is remarkable,” Chung continued. “Korea, the world’s most wired country, truly is a trendsetter in information technology but somehow its design was less known on the world stage. And look what has happened. Seoul is breaking its long-held perception on design by becoming a design flagship in line with other design-advanced cities. This is remarkable.”