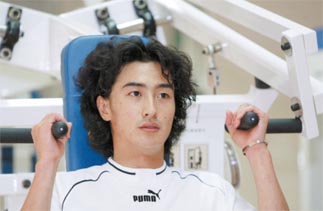 QINMING, China - As manager Huh Jung-moo comes close to finalizing his 23-man roster for the national football team, Ahn Jung-hwan’s name is still in the running. Huh has yet to find a reliable scorer, and the veteran forward will likely battle Lee Dong-gook for one of the final spots on the squad.

Ahn has been in winter training camp with the Dalian Shide Football Club of the Chinese Super League since Jan. 3. In an exclusive interview with the JoongAng Ilbo, he said, “It’s every football player’s dream to compete in the World Cup [but] there’s nothing I can do at this point other than train hard and try my best.”

Best remembered for scoring the golden goal against Italy in the 2002 World Cup round of 16 matchup, Ahn is currently being evaluated by the national team coaching staff.

Assistant coach Jung Hae-sung is set to arrive in Qinming to watch the friendly match between Dalian Shide and Gangwon FC today.

Q. How is your physical condition at this point? Are you in good shape?

A. China didn’t qualify for the 2010 World Cup, so the Chinese Super League season is set to start at the end of March. I’m in the process of getting in game shape with the season opener in mind.

It looks highly likely that you will be called into play in the March 3 friendly match against Cote d’Ivoire.

I haven’t thought that far ahead. It will be an honor if I get the call. If I do get selected, I would be representing Korea. I will give it my best.

Huh recently said he’ll keep a close eye on you and Lee Chun-soo.

I don’t know exactly what he’s thinking, but it feels like I’m being included among the players who are needed on the national team and that feels good.

It looks like you have a strong desire to compete in the World Cup.

It’s every football player’s dream to compete in the World Cup. However, since the national team has done well without me in the lineup, I hadn’t given the possibility much thought.

There are many players who are more skilled than I. There’s nothing I can do at this point other than train hard and try my best to play the game to the best of my ability.

Many of the Europe-based players are doing well these days.

I didn’t get a chance to watch the game but I did read about their performances on the Internet. I’m proud of them. They’re playing a big role in the development of Korean football. It will make it easier for others to make the jump to Europe in the future.

You have one year remaining in your contract with the Dalian Shide. You must be pondering your options for next season.

As an athlete nearing the end of his career, it feels good just to be training and playing the game on a daily basis. It helps to focus on the moment and makes the game all the more enjoyable.

I am currently torn between retirement and the challenge of playing in another challenge.

Is a return to the K-League a possibility?

I can’t say for sure, but as of now, I’m not really interested in going back to the K-League. But if I were to make a return to Korea, I would like to sign with the Suwon Bluewings.

I fondly recall the avid Suwon supporters and the love they showed in my previous stint with the club.

It would be nice to pay back their support.