Brothers, on stage and off, in ‘Rainman’

Brothers, on stage and off, in ‘Rainman’ 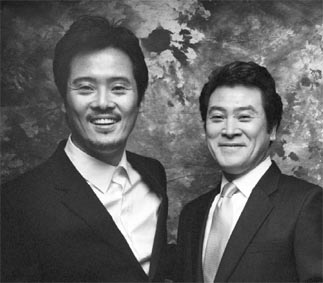 Real-life brothers Nam Kyung-joo, left, and Nam Kyung-eup play fictional brothers in the new Korean play “Rainman,” which is based on the 1988 movie “Rain Man.” Provided by the organizer

“When we read through the script for the first time, I cried a lot because it reminded me of what happened to us some 20 years ago, and I felt like the script was written for me and my brother,” Kyung-joo said in a recent press conference. “At that time, my brother had just gotten married and started his own family, but I begged him to live with my mother and me, and I remember crying for 20 minutes. It was the first time I had ever lived without my brother so I guess I felt insecure.”

For Kyung-joo, who is a prominent musical theater actor, Kyung-eup is more than a brother: he has not only been a mentor, he has had a significant influence on Kyung-joo’s life.

Back in 1978 when the term “musical” was foreign to most Koreans, Kyung-eup started performing in musicals, which inspired his younger brother to do the same.

“Kyung-joo was a troublemaker,” Kyung-eup said. “He was even sent to Samcheong Training Camp when he was in high school.”

Samcheong Training Camp, established under the regime of former President Chun Doo Hwan to discipline people who were considered harmful to society, was a concentration camp.

“My brothers’ teachers often called me about Kyung-joo. They always compared me to him because I was a model student,” Kyung-eup laughed.

Kyung-eup may have been the first actor in the family, but Kyung-joo soon began to surpass his brother.

“Kyung-joo used to be an actor with so much passion, but he has started to develop more insight into acting,” the elder brother said. “Now there is a depth and philosophy to his acting. He inspires me all the time.”

Kyung-joo has performed in many Korean productions of renowned musicals such as “Cats,” “Chicago,” “West Side Story,” “Les Miserables,” “42nd Street,” “Rent,” “Kiss Me, Kate” and “Singing in the Rain.”

But he still sees his brother as a natural-born talent and says that not only does he think highly of him, he is also motivated by him.

“He never stops reading his script, wherever he goes,” Kyung-joo said. “He’s still alive and kicking.”

Even before regular rehearsals of Rainman began, Kyung-eup had memorized all of the digits in the irrational number pi.

“I got a lot of stares on the KTX on my way to Seoul because I kept murmuring to myself,” he said.

So what is it like for real-life brothers to play fictional ones?

“Since we share many things in our lives and I know many private things about my brother, it sometimes prevents me from seeing my brother as Raymond,” Kyung-joo said.

For that reason, Kyung-eup says he tries to refrain from talking to Kyung-joo at rehearsals “because I want to see him as Charlie, not as my biological younger brother.”

With a few days to go before the premiere, the Nam brothers say they have a mantra they repeat to themselves: “The more an actor sweats, the better the performance will be.”