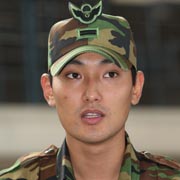 Former H.O.T. member Kangta is planning to celebrate the end of his military service with his fans.

Prior to his solo debut in 2001, Kangta was a member of the group H.O.T., one of the most popular idol groups in Korea.

The singer began his mandatory military service on April 1, 2008, and was part of the army’s special forces.

After he is discharged on Feb. 19, he plans to meet over 600 of his fans at an event at Sookmyung Art Center.