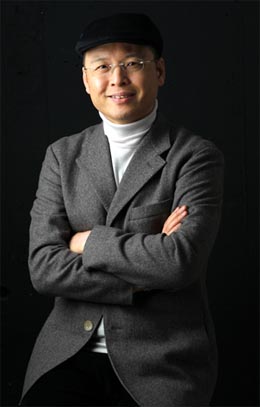 No television drama has been as straightforward about “hakbeol,” or elitism, as KBS TV’s “Masters of the Art of Study.”

The drama revolves around a group of students who stay awake until all hours of the night to study so that they can get into a prestigious university, which they believe is the only way to survive and lead a successful life.

Based on a Japanese manga series titled “Dragon Zakura,” written and drawn by Norifusa Mita, the television drama has faced harsh criticism from some parent and other civic groups here for fueling the private education craze.

However, Mita, 52, who visited Seoul for the first time late last month, defends the show by saying that studying is a way to express one’s individuality.

“There are teenagers who love to play sports games or listen to music. I also believe there are teens who love to study. I wanted to encourage them,” Mita said while he was touring the set of the TV drama at the Korean Broadcasting System studios in Yeouido, western Seoul.

In the drama, the students dream of being admitted to the fictional Cheonha University.

In contrast, the students in Mita’s comic hope to gain entrance to the real-life University of Tokyo, which is a dream college for many Japanese teenagers.

“I used the University of Tokyo as the backdrop [for my manga series], but I wanted to tell people that study offers a chance for personal growth,” Mita said. “If you set a goal and immerse yourself in something, whether it is study or something else, you will grow and mature.”

Still, Masters of the Art of Study has come under fire for showing students who only want high scores on the college entrance exams, without also showing the value of personal development.

For example, the manga series suggests that cramming is one of the most efficient ways to study, as at one high school in the series, which invites famous teachers from outside the school to come in and help students pass their exams.

When asked if the manga series spurs private education fever, Mita said, “I think schools should keep up with the changing times to meet the demands of students and parents.”

Masters of the Art of Study has earned ratings of over 25 percent, which is a sign that the drama is popular, in spite of the controversy it has generated.