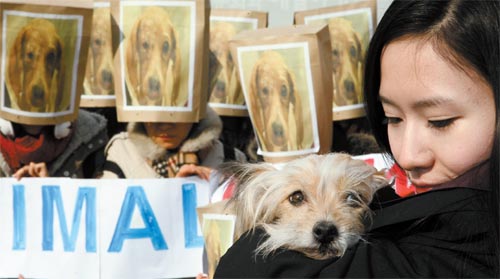 Protesters demonstrate at Seoul Plaza in front of City Hall on Jan. 24 in favor of harsher punishments for animal cruelty. Under current law, animal abuse can only be punished by a fine of up to 5 million won (4,350 dollar). No sentence can include jail time. [NEWSIS]

The man in his 40s, who lives in southeastern Seoul, allegedly pulled out the claws of a poodle with pliers and burned it with a lighter. He also said he forced the dog, one of several he had adopted over the Internet, to swallow box cutters, which later led to its death, and confessed to beating other dogs to death and putting newborn puppies into a public trash can. Though he only told the police about killing eight animals, officials say it is likely he killed more.

He is still being investigated by the Songpa District police and is awaiting indictment. 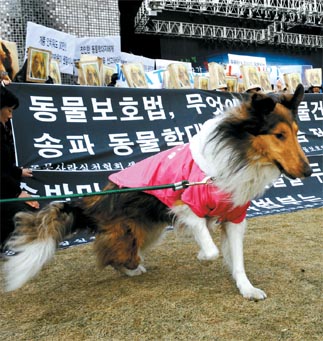 A dog that had its leg severed after being caught in a hunter’s trap sits in front of protesters at Seoul Plaza in central Seoul on Jan. 24. [NEWSIS]

But no matter how hard the prosecutors try, the man will not go to jail. Instead, he will probably end up paying a fine of several hundred thousand won, or a few hundred dollars.

This generous attitude toward animal abuse is enshrined in Korean law. According to the most recent revision to local animal protection law, which was passed in 2006 and came into effect in 2008, the maximum penalty for animal cruelty is a fine of 5 million won ($4,350).

Still, no animal abuser has ever had to pay that much. The SBS program revealed that the maximum fine courts levied on anyone convicted under that law in the last three years was 500,000 won.

A man who burned a cat to death paid 200,000 won. Another man who deliberately killed a dog by throwing it from a high-rise apartment was sentenced to a 300,000 won fine.

The popular Sunday TV show sparked public outrage. On the day of the broadcast, the Korean Animal Welfare Association (KAWA), a nonprofit organization, launched an online petition for stronger animal cruelty laws on its Web page, www.animals.or.kr. A statement on the site reads, “How dare the prosecution talk about a culture of life when it is showing such a complacent attitude toward cruelty to animals?” As of late last week, the group said 53,000 people had signed.

An X-ray that appeared on the SBS television program “Animal Farm” shows box cutters in the stomach of a poodle. A man in southeastern Seoul adopted the animal online and confessed he fed it the blades, which led to its death. The man also said he burned the dog with a lighter and pulled out its claws with pliers. He is awaiting indictment. [NEWSIS]

One blogger nicknamed “Corgi” posted about the controversy on an online forum for dog lovers at portal site Naver. “I was extremely angered and heartbroken after watching the show. How can a man do such brutal things to pets that unconditionally make you happy and give you smiles?

“But what’s most pathetic,” he continued, “is the country’s animal protection law. The level of punishment is excessively low. Don’t any law officers keep pets?”

The Korean Kennel Club estimates as of August 2009, 3.5 million pet dogs were being kept by families of about 10 million people, or one-fifth of Korea’s population.

On Jan. 22, five days after the broadcast, a handful of animal rights groups including the KAWA protested at a Songpa police station to demand harsher punitive measures for animal abusers. The advocates held up photos of abused animals, staged performances, read a joint statement and later delivered copies of it to the police, the Supreme Prosecutors’ Office and the Supreme Court. A similar event was held two days later at Seoul Plaza.

After collecting more signatures, the group intends to submit its petition with contributions by other animal activists to the National Assembly, asking it to add harsher punishments for animal cruelty, including prison time for the worst of the worst, and ban heinous and repeat offenders from breeding animals for a period up to the rest of their lives.

Chung Kyoung-ok, program director at the association, says the more people who participate in the campaign, the bigger the chance of changing the law.

“Before the first law revision four years ago, we had collected signatures from 70,000 people, and that figure helped arouse sympathy for animal protection among lawmakers,” she said.

Korea’s original animal protection law was passed in 1991, three years after the Olympic Games were held in Seoul, after an explosion of petitions from overseas animal welfare groups. Much of this outrage was provoked by the still-prevalent practice of eating dog meat, according to an official at the animal quarantine department of the Ministry for Food, Agriculture, Forestry and Fisheries, which handles animal policy.

“The country’s first-ever animal cruelty law was only one page, carrying only a few symbolic clauses with no details, such as ‘animals should not be intentionally injured or terrified by humans.’ What’s more, the country never promulgated its enforcement ordinance, meaning the law was never enforced,” said the civil servant, who asked not to be named.

Under the initial animal protection law, the maximum fine for animal abuse was a mere 200,000 won. That wasn’t revised until the National Assembly revision passed in December 2006 raised it to 5 million won.

A recent surge in the number of pet owners is the driving force behind the recent progress in Koreans’ attitudes toward animal rights, the Agriculture Ministry official said. But the law seems to be having trouble catching up to public opinion.

The revision even marked one major step backward in that it removed the clause that allowed imprisonment of animal abusers - even though no one had ever actually gone to jail under the law. Other advanced countries with large pet-owning populations, including the United States, Australia and England, allow prosecutors to pursue jail terms for animal cruelty.

“Lawmakers claimed putting animal abusers in prison was premature, given that the country was not properly protecting socially weaker demographics including women and underage people yet,” the official said.

This lack of concern for animal rights was not limited to lawmakers. When asked about the legislation in a phone interview, a spokesman for the Constitutional Court of Korea who is also a judge was unaware it even existed, responding, “Is there such a thing? I didn’t know animal abusers could be punished. Perhaps not many judges or prosecutors have to deal with such cases.”

According to the spokesman, Korean courts have thus far been indifferent to animal rights as they are too busy paying attention to crimes against humans. But he also added that it is time to have “stronger punitive animal legislation.”

Kim Jae-won, one of producers of the Animal Farm show, said the majority of animal abusers he encountered while making the show had “incorrect perceptions of living creatures.”

“There is still a sizable population that considers dogs or other animals merely as trivial objects, not as companions. Many of those charged with animal cruelty didn’t know they were violating the law, nor did they even know they were doing something that was not right,” he said.

The serial animal killer featured in the show, Kim said, admitted he habitually hurt animals to relieve stress and derived pleasure from it.

And the issue is not unrelated to human crime, according to Lee Soo-jung, a professor of criminal psychology at Kyonggi University, who said violence against any living creature can be a prelude to violence against human beings. Case studies show, Lee said, that serial killers tend to take lives of animals as a rehearsal for homicide. She offered the example of Kang Ho-sun, who was charged with murdering 10 women early last year and was sentenced to death. Kang ran a dog and chicken farm and confessed to having slaughtered dogs by hanging or starving them.

Lee said those people who are accustomed to killing animals “for fun” need professional help, but no regulations are currently in place mandating such a measure for those showing symptoms.

“I think it’s necessary for the government to forcefully intervene in the psychotherapy of chronic animal abusers,” Lee said. “They could be subject to state-provided treatment or counseling sessions regularly for a limited period. Underage perpetrators could be sent to boot camps for morality training.”