North economic official is out of view

North economic official is out of view 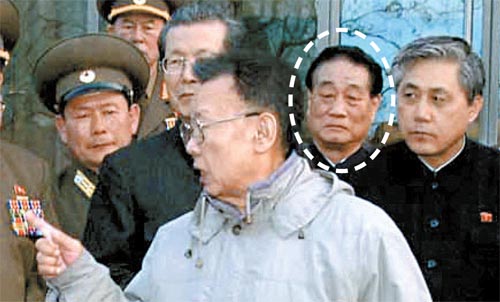 Pak Nam-gi, head of planning and economy at the ruling Workers’ Party, was last seen accompanying leader Kim Jong-il in early January. In this file photo, Pak, second from right in back, was shown last March when Kim, forefront, visited a new swimming pool at Kim Il Sung University. [YONHAP]

With reports of starvation and unrest in North Korea following its recent currency revaluation, a key economic bureaucrat has remained out of sight for a month, possibly after being dismissed for his role in the action.

Pak Nam-gi, head of planning and economy at the ruling Workers’ Party, was last seen accompanying leader Kim Jong-il in early January. As an influential economic figure, Pak had often joined Kim on his field inspections of industrial sites. In 2009, Pak followed Kim on 77 occasions, the third-highest total among government officials.

Kim has continued to visit industrial bases, a move analysts here have said is designed to show his commitment to reviving the nation’s downtrodden economy. But Pak has been missing from Kim’s side.

Intelligence sources and government officials confirmed that Pak has not made recent trips with Kim.

“We understand Pak has not been visible for some time now,” a government source said. “But whether he has been fired is an entirely different matter. Unless someone else takes his post, we can’t say for sure.”

Local reports speculate that Pak was held accountable after the redenomination of the North Korean won in November caused inflation and even riots.

Pak was named to the Workers’ Party post in late 2004 and South Korean intelligence suspected he and Jang Song-thaek, another influential party member and brother-in-law of Kim Jong-il, pushed for the currency change last year.

Old bills were exchanged at the rate of 100 to one. The revaluation, the first such move in 17 years, was regarded as an attempt by the North government to take firmer control of the economy, curb inflation and halt underground free market activities.

North Korean human rights and defector groups have said the currency revaluation angered the public because people saw the value of their money plunge. And since the redenomination drove up the price of rice, many people have faced starvation.

In its newsletter, a human rights group called Good Friends quoted a Workers’ Party study as saying that in January, two people a day have been dying of hunger on average in Danchon, South Hamgyong, one of the most destitute regions in North Korea.

“According to this study, people’s lives are in danger,” the newsletter read. “Merchants are especially in a dire situation because they’ve been prohibited from running their businesses.”

Good Friends also said the Ministry of the People’s Armed Forces held a meeting on Jan. 20, attended by commanders and other officials, to discuss securing provisions for the armed forces - an indication that even the North’s military is running out of rice.

North Korea Intellectuals Solidarity, a Seoul-based think tank, cited an anonymous source to report cases of physical confrontations between North Korean people and security personnel. In one instance, one civilian stripped a security guard of a firearm and fired several rounds. The guard was critically wounded.

Daily NK, an online news site covering North Korean affairs, said another guard on duty checking for illegal market activity was struck in the head by an unidentified person.