To Feb. 20: “Julian Schnabel New Paintings.” Julian Schnabel is an American artist and filmmaker who has received international recognition for the paintings and award-winning films he’s made over a 30-year career.

The current exhibition features a total of 11 pieces of Schnabel’s work, including new paintings and older velvet prints from 1984. On display is a series of Schnabel works titled “China Paintings,” which was first presented at the Phillips de Pury & Company’s exclusive showing at the Saatchi Gallery in 2008.

While primarily focusing on his role as a film director, Schnabel also devotes time to creating a new series of paintings every year. His works are exhibited all over the world in major public and private collections. A collection of his works, for instance, is currently on display at the Gramercy Park Hotel in New York, a luxury boutique hotel designed by the artist himself. His paintings also appear alongside pieces from famous artists such as Damien Hirst, Keith Haring, Andy Warhol and Richard Prince. 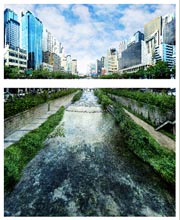 To Feb. 25: “Encounter.” Artist Lim Sang-bin graduated from Seoul National University with a degree in Western art before attending Yale University to study painting and engraving. He is currently studying at Columbia University Art School and is developing a reputation for taking his eye-catching photos that combine several scenes.

At first glance, his pictures seem to depict natural scenes of cities. However, a closer look reveals that they are odd and distorted. In one photo, for instance, Seoul and New York are melded together, while in another a high-rise building towers on top of Deoksu Palace.

Lim attempts to combine both the traditional and modern aspects of today’s world in his pictures.

Most of his pieces consist of two or more photos fused together. Lim also takes multiple shots of the same scene to provide views that can’t be captured by the human eye all at once.

To Feb. 28: “Arrange By Chance.” Artist Choi Bong-lim, well known in Korea for his work as a photo critic, is having his second solo exhibition.

His first exhibit in 2006, titled “Photographic Reconstruction,” dealt with photographic art’s duplicating and changeable characteristics. His ongoing exhibit, “Arrange By Chance,” focuses on the flexible nature of photo art.

The main inspiration behind these works dates back 20 years, when Choi had just finished his mandatory military service and decided to trek up into the mountain regions of Korea during the summer.

Choi said he distinctly remembers the countless moths that would gather at night around a little light he had.

The title of the exhibition was influenced by American painter and artist Ellsworth Kelly and her exhibition titled “Spectrum Colors Arranged by Chance.”

For the works in his latest exhibit, Choi gathered moths and other nighttime critters and put them on an even surface. The photographer said he did not control the number, type and arrangement of the bugs on the surface.

To Feb. 28: “Groove of Time.” The gallery is holding its first exhibition of the year under the ongoing theme “literature meets art.”

This marks the 20th exhibition under the theme, which the gallery adopted in 2004. The exhibition is a collaborative effort between writer Park Beum-sin - who penned the novels “Groove” and “Gosanja” - and artist Ahn Jong-yuen.

Park, known for his ability to express sensuality and sympathy in his novels, chose Ahn to make his words come alive.

“Groove of Time” depicts Park’s ideas from his book Groove, which explores the concept of how things die or disappear over time. He connects this with the cycle of life and death that every creature on the planet experiences.

The book explores not only the flow of time but the depth of time as well. The story centers on a 50-year-old man trying to make all of his childhood dreams come true, giving up his family in the process.

The book delves into the aspects of today’s society that condemn age and fear growing old.

Ahn expresses these ideas by using many different materials like stainless steel, glass and rocks, among other items.