They give back by telling tales

They give back by telling tales 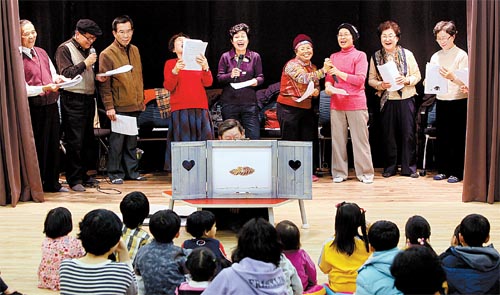 The members of Dokkebi Gamtu perform at Songpa Children’s Library in the Songpa District, southeastern Seoul. By Park Jong-keun


Remember when your grandparents would sit down and read you a story?

It was comforting. It formed family ties.

And 10 retired public-service workers and teachers between the ages 60 and 70 are determined to keep it a tradition.

Their group, Dokkebi Gamtu (which is also the title of a Korean folk tale), volunteers every Thursday to read books to kids at the Songpa Children’s Library.

“At first we were worried about whether children would be interested in what a bunch of old folks had to say,” said Yoo Byeong-cheon, the head of Dokkebi Gamtu. “But it turned out to be such a success that we started to add pictures to our stories in December.”

The group got its start last May in a classroom provided by the district office, and soon it was offered community-service space at the local library.

Now, the members of the group gather before every reading to research and debate which folk tale they should pass on to the children.

Once the choice is made, they pick illustrations which match the story, enlarge the pictures and photocopy them for their audience.

After several rehearsals acting out the colorful tales, the volunteers take the stage.

“The preparation before each show really wears me out, but when I see the faces of the children glowing, all the fatigue goes away,” said Lee Myeong-ja, a group member.

One frequent visitor to the group’s readings, 7-year-old Seo Hee, says “I don’t get to see my grandmother very often because she lives far away, so it’s fun to listen to old stories from the grandmas here.”

Dokkebi Gamtu is the rage with mothers all over Seoul because the performances have a calming effect on their children.

“It’s strange to watch my rowdy, wild children suddenly get quiet and attentive when the reading begins,” says Kim Hyeon-gyeong, who brings her children from Nowon District. “The other mothers and I have asked Dokkebi Gamtu to perform more often.”

The members do not stop at simply reading stories. They are now trying out other activities, such as playing traditional games with the children and running educational programs on their teaching methods for the moms.

“I’m interested in the traditional way of teaching, because it’s more nurturing for children. So I’m taking classes from the elders here,” Jeong Eun-mi, a homemaker, said.

Dokkebi Gamtu and the Songpa Children’s Library are also making a bedtime storytelling CD and plan to distribute it to their audiences.

To Yoo, it’s a small gesture of gratitude from the group.

“I’m just happy that at our age, we still can do so many things with these children.”