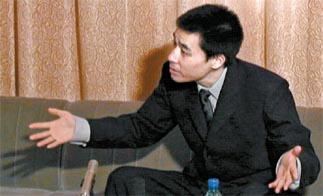 North Korea said yesterday it would release a Korean-American missionary who walked into the country last Christmas Day.

The official Korean Central News Agency reported that Robert Park, 28, will be freed for showing “sincere repentance” for his actions. It did not explain where or when Park would be released.

Park, from Tucson, Ariz., walked into the country across the frozen Tumen River that borders China and North Korea. According to human rights activists in Seoul who knew about Park’s trip, the missionary carried a letter addressed to North Korean leader Kim Jong-il that urged him to open the border to let in food and medicine for dying North Koreans and to shut down concentration camps.

The news agency said the North’s investigation concluded that Park trespassed on the border “due to his wrong understanding” of North Korea, but it decided to “leniently forgive” him since he acknowledged his wrongdoing.

The announcement of the release comes just before a visit to North Korea by envoys from the United Nations. B. Lynn Pascoe, under secretary general for political affairs, and Kim Won-soo, special advisor to Secretary General Ban Ki-moon, will be in North Korea from Tuesday through Friday. They are expected to meet high-level officials in Pyongyang to discuss humanitarian issues.

In a separate dispatch, KCNA carried a transcript of an interview with Park. The missionary was quoted as saying that he entered the North because of his misunderstanding of the country “caused by the false propaganda made by the West to tarnish its image,” and that he was prepared to be killed or at least imprisoned for his actions.

Instead, Park said he was treated well and even went to a Pyongyang church for services.

“I would not have committed such a crime if I had known that the [North] respects the rights of all the people and guarantees their freedom and they enjoy a happy and stable life,” he was quoted as saying. “I am convinced there’s complete religious freedom for all people everywhere.”

Analysts here took the interview with a grain of salt. Koh Yu-hwan, professor of North Korean studies at Dongguk University in Seoul, said the North may only have been trying to promote a more positive image of itself.

“The North Koreans used Park’s release to ostensibly show the rest of the world that the North guarantees religious freedom,” Koh said.

Yang Moo-jin, a professor at the University of North Korean studies in Seoul, called the interview transcript Park’s “letter of apology.” With Park’s reference to North Korea’s generosity, Yang said the North wanted to prove to its critics that it does not violate human rights.

Last year, two U.S. journalists, Euna Lee and Laura Ling, were held for about five months after they were caught near the China-North Korea border on a reporting mission. Former U.S. President Bill Clinton met Kim Jong-il to gain their release in August.

Their detention was highly publicized. Lee and Ling’s families and friends held candlelight vigils and other gatherings to demand their early and safe release. The North also detained an unidentified American for illegal entry from China on Jan. 25.