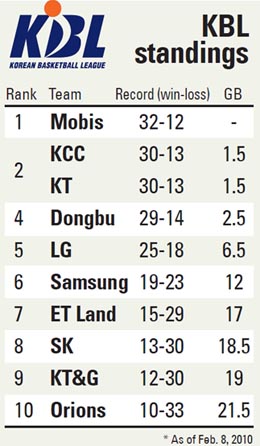 The race to finish at the top of the KBL league standings is heating up.

Mobis Phoebus currently leads, if just barely, with KT Sonic Boom and KCC Egis trailing by a game each. Dongbu Promy trails the second-place teams by another game.

The top teams in the league have not lost many games against the ET Land Elephants, SK Knights, KT&G Kites or Daegu Orions. But a poor record against the lower-ranked teams can be detrimental to the top-ranked teams. KCC won three and lost two against KT&G this season, while Dongbu did the same against Daegu.

“The remainder of the season, the teams that lose to the lower-ranked teams will be left behind the rest of the pack,” said Mobis head coach Yoo Jae-hak.

Also of interest is the showdown between the top teams this month. This past weekend, Mobis fell to KT but won against KCC, while Dongbu prevailed in its Saturday matchup against KT&G.

Dongbu will face KCC tonight and KT on Thursday night. Mobis will face KCC on Feb. 19 and KT on Feb. 21. The top of the league standings will be sorted out by the end of the month.

Dongbu holds the key to stirring up changes in the league standings. If the team manages to muster several wins against opponents this month, big changes can occur in the rankings. KCC is currently shaky without star center Ha Seung-jin and Dongbu has fared well against KT with a record of three wins and one loss this season.

The KBL playoff system has the top two regular season teams advance to the semifinals to face the advancing winners of the first-round matchups between the fourth- and fifth-placed teams and third- and sixth-placed teams.

“If KCC fails to overcome Ha’s absence from the lineup and ends up as low as fourth place, it can cause a huge change to the playoff picture as well,” said an official from one of the top-four teams.