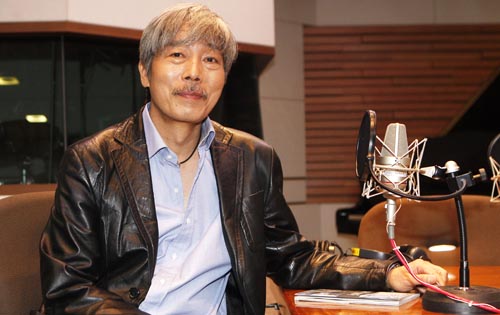 “Bae Chul-soo’s Music Camp” celebrated its 20th anniversary yesterday. The MBC program is one of the longest-running radio shows specializing in Western pop music in Korea.

To commemorate the event, Bae, working with global record labels, produced a list of the 100 best albums in history. The albums, on the Warner, Universal and Sony music labels, will be sold in Korea with a mark indicating they are part of Bae’s list. Bae also published a book with detailed information about the music on the list.

The 100 albums were released in the period from 1950 to the present and represent the genres of rock, pop, jazz and hip hop. Thirty of the albums are difficult to buy in Korea - including Elvis Presley’s “Elvis Presley” (1956), Iron Butterly’s “In-A-Gadda-Da-Vida” (1968) and Uriah Heep’s “The Magician’s Birthday” (1972). The CDs went on sale yesterday at local record stores, with more to follow.

Bae, a rocker-turned-D.J. known for his signature mustache and sense of humor, said he based his choices on a variety of sources, ranging from Rolling Stone magazine and the VH-1 cable channel, to global sales records and Grammy Awards given for album of the year. He noted, however, that the list may not make everyone happy.

“The act of listening to music is extremely subjective,” he said at a press conference yesterday at the MBC headquarters in Yeouido, eastern Seoul. “If anyone questions my choices, I intend to respond, and I’ll be willing to talk about it at any time,” he said. “But if you keep asking, I’ll have no choice but to say ‘because I liked them.’”

Before he became a D.J., Bae was a guitarist and the leader of Songgolmae (Peregrine falcon), which was influential in the 1980s.

Bae said his top priority in life over the past two decades has been the radio show. He has made it a rule to arrive at the station two hours before the show starts and seemed proud to say he has never been late for work.