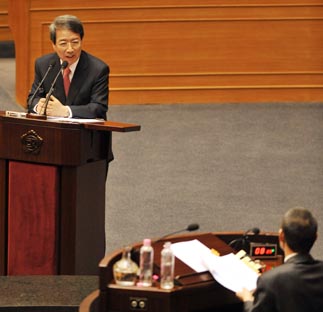 Although the substance and background are different, the revision of the Sejong City project in Korea and efforts to reform the health care system in the United States have many things in common.

One similarity between the two is that the ruling administrations in both countries are facing stiff resistance from the opposition parties as well as internal conflicts and varying opinions on how to proceed.

These situations are like black holes, as they suck up other social agendas and divide public opinion nationwide, ensuring that other important issues get shoved aside.

Another similarity between U.S. health care reform and the Sejong project is that it is difficult to predict the consequences of supporting or opposing these issues. The Democratic Party in the U.S., for instance, lost a valuable Senate seat that it could have used to prevent the Republican Party from delaying or even completely blocking health care reform. We’re seeing a similar situation play out here in regards to the Sejong City issue.

Just in time for the first anniversary of Obama’s inauguration, experts at think tanks were asked to select the biggest accomplishment and biggest mistake the U.S. president has made so far. Experts on the liberal side of the political spectrum defined his pursuit of health insurance reform as his biggest accomplishment and his decision to dispatch additional troops to Afghanistan as the president’s biggest mistake. Conservative experts, on the other hand, said exactly the opposite: that the Afghanistan troop deployment is his greatest success and health care reform is his biggest mistake.

This example shows just how difficult it is to find a middle ground on the health care issue in the U.S. - just like with Sejong in Korea.

Obama has drawn up various strategies over the past year for health insurance reform. At first, he focused on justifying the reform and left the particulars to Congress. The aim was to avoid the path of former President Bill Clinton, who tried to take control of the issue and ended up failing. Of course, Obama was certainly active behind closed doors, meeting frequently with senators and other influential people. However, he found it difficult to get the cooperation of the Republicans.

In the end, Obama decided to rely on his party’s higher number of representatives in Congress.

The U.S. president had victory within his grasp, but it slipped away right in front of him when residents of Massachusetts, a stronghold of the Democratic Party, turned to a Republican in a crucial Senate race. Election experts pin this devastating loss on Obama’s inability to ease concerns over possible cost increases resulting from the health care plan and general dissatisfaction.

Disappointed, Obama claimed that it does not matter if he is only in office for a short time, saying he is pushing for what he thinks is best for the country. And he’s now running toward Republican senators once again to get their support.

One easily missed commonality between health care reform in the U.S. and Sejong is that they are both legislative matters. They need to receive the green light from legislative bodies. In other words, the countries’ respective presidents can’t simply make these proposals into laws on their own.

It’s difficult to guess how the Sejong or health care issues will shake out.

However, the Korean National Assembly and the U.S. Congress appear to be handling the problems differently. In the U.S., legislators are talking continuously in an attempt to hammer out some type of agreement. Every senator and representative is also revealing his or her position on the issue, so the public knows where they stand. Korea should take a page from this example and lean toward cooperation, not division.

*The writer is the Washington correspondent of the JoongAng Ilbo.