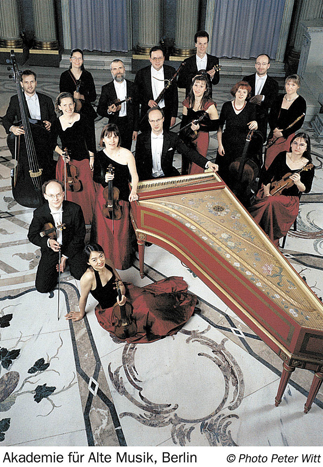 The link between Beethoven, Bach and Brahms is apparent in classical music history. Beethoven studied the works of Bach in depth and Brahms once said: “Study Bach: There you will find everything.”

The Seoul Arts Center is set to launch a three-year project featuring the works of the three composers, called the Great 3B Series, on Thursday. Meanwhile, noted German baroque orchestra Akademie fur Alte Musik Berlin (Akamus) will offer early music fans a chance to savor the works of Bach in a concert in Seoul later this month.

The first year of the 3B Series will be led by the Suwon Philharmonic Orchestra, with conductor and pianist Daejin Kim. They will play the music of Beethoven at monthly concerts through December. Kim, a professor at the Korea National University of Arts, is a Beethoven expert. As a pianist, he once played all five Beethoven concertos on a single day in 2000 - an unprecedented feat for a Korean artist.

The 3B Series will open with a concert by Lim Dong-min, an acclaimed pianist and professor at Keimyung University. Lim gained attention after taking third prize in the 15th International Frederic Chopin Piano Competition in Warsaw in 2005, tying with his younger brother Dong-hyek.

“Beethoven is a shining model for us in that he never gave up his unrelenting passion for life,” conductor Kim said. “I want to be a medium for delivering his message to people.”

Next year, the Bucheon Philharmonic Orchestra will play the works of Brahms, and in 2012 the Korean Chamber Orchestra, the nation’s leading baroque ensemble, will play Bach.

Separately, the Akademie fur Alte Musik Berlin, or Academy for Early Music, will present Bach concertos and church cantatas at the LG Arts Center in southern Seoul on Feb. 17. The academy, based in Berlin, has risen to worldwide acclaim since its foundation in 1982 for its efforts to perform on historic instruments and collaborate with celebrated artists.