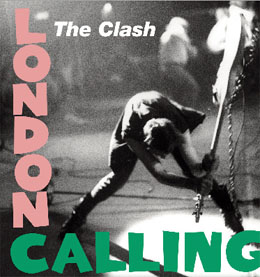 “London Calling,” released 30 years ago last December, is a record of a place 10 years removed from the “phony Beatlemania” that must have been as corrupt and cynical as it was diverse, funky and lighthearted.

To mark this anniversary, the Clash have reissued their towering album with a DVD that includes “The Last Testament,” a documentary filmed before front-man Joe Strummer’s untimely death in 2002, as well as videos and concert footage of the songs “London Calling,” “Clampdown” and “Train in Vain.”

But it’s the approximately 20 minutes of raw footage from their recording sessions that makes this worth getting your hands on. At one point producer Guy Stevens starts throwing chairs and ladders around the studio. The lads are in the middle of a cover of “Louie Louie” and they act like nothing is going on around them. It’s pure rock and roll.

If you’re a fan, it might seem like a spartan reissue of such an important album. If you’ve never experienced it, get ready to enjoy a rock band having a lot of fun, hitting their stride for 19 straight tracks. By Andrew Siddons