The jury examines the ideas presented in the competition for a new branch of the National Museum of Contemporary Art on the site of the former Defense Security Command building in central Seoul. Provided by MOCA


Amid expectations and concerns, the project to set up a new branch of the National Museum of Contemporary Art on the site of the former Defense Security Command headquarters near Gyeongbok Palace in central Seoul is moving forward. Last week, the museum selected five architectural firms from the over 110 that applied to design the new space. The winning firm will be announced in May.

Despite lingering concerns about what kind of museum will be installed next to the quiet, old palace and the adjacent streets of the Bukchon and Samcheong neighborhoods, which are filled with private galleries, cafes and small, old-fashioned houses, the project to convert the DSC headquarters, which was notorious for its secret surveillance of civil rights activists under the military regime, the jury and selected firms are eager to develop their ideas.

The five projects differ from one another in terms of shape and overall feel. Some have a more contemporary edge while others seem to contain distinct traces of traditional Korean architecture.

For example, the proposal by architect Shin Chun-gyu shows a cultural complex consisting of eight low-rise buildings, including the remodeled DSC building. The buildings, which are placed at odd angles in relation to one another and are connected underground, form courtyards of various shapes at ground level. The courtyards spill out into the lanes of the surrounding neighborhood.

The plan submitted by architect Lee Pil-hoon shows a square structure that subsumes the newly remodeled DSC building on one side and has a courtyard in the center. The walls of the structure form arcades, allowing visitors easy access to the interior from any side. The courtyard has a media art box, which could presumably be used for digital installations.

What the five designs do have in common is that they create harmony with the surrounding neighborhood and are open to the public. 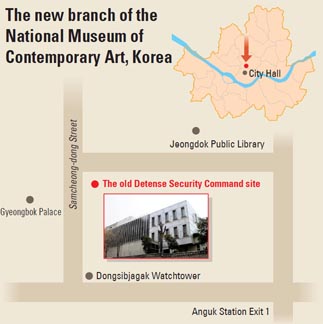 Bergdoll is the Philip Johnson Chief Curator at the Department of Architecture and Design at the Museum of Modern Art in New York. The jury also includes Cho Byoung-soo, an architect and head of the Seoul-based firm ByoungSoo Cho Architects, and Marco Pogacnik, a professor of architectural history at the University IUAV of Venice.

The three jury members expressed their views on the new museum and the submissions they received in an interview with the JoongAng Daily on Jan. 30, in the midst of the evaluation period.

Q. There is a concern that the museum could clash with the palace and surrounding area. How would you respond to that?

Bergdoll: I don’t think it is difficult to find a beautiful solution that allows the museum to harmonize with the palace and the neighborhood behind. It is a wonderful chance to transform a formerly closed place with a complicated political past into a place that welcomes the public and becomes a hub for cultural activity and interchanges. This is a once-in-a-hundred-years opportunity to change the daily and cultural life of the capital city.


Has that point of view been applied to your examination of the project proposals? What were your selection criteria?

Bergdoll: Before looking at the projects, we visited the site, understanding the context. And then we discussed how the site could be changed and how it could be open to the different contexts.

Cho: We considered all of the contexts, ranging from a physical context [the environment] to historical, cultural and social contexts. In the historical context, the DSC building should be preserved, as Korea has only a few old buildings, including those built in the early 20th century amid the country’s rapid period of development. These buildings are historically important. Some think that only pre-modern buildings are important, but that is a wrong idea.

From left, Barry Bergdoll, the Philip Johnson Chief Curator at the department of architecture and design at the Museum of Modern Art in New York; Marco Pogacnik, professor of history of architecture at the University IUAV of Venice; and Cho Byoung-soo, an architect and head of the Seoul-based firm ByoungSoo Cho Architects. Provided by MOCA

We have seen many good project ideas in this competition, with respect to the historical context as well as other contexts. Important issues in other contexts include how the museum opens to the main street [west of the museum], how to make use of the view from the DSC building and how to attract visitors to the streets of Bukchon [north of the museum], which have already developed into a beloved cultural spot, and others.

We also consider what a 21-century museum should be and what spaces the new museum should have, given that the interests of the public change fast.

Pogacnik: We spent many hours looking at the site. What really impressed me was not only the site where the museum would be built but also the context - the palace, the main street on one side and the neighborhoods on the other side. I was impressed by the vitality of the site. So one of the first criteria to see is how the different projects interpret the beauty and specificity of the site.

We have never considered the question of what kind of Korean museum this should be. International standards of art are important and the new museum should also respond to those standards. In the way that a project interprets the special context of the site on which it is built, however, the project will be a Korean museum of modern art.

Were any of the projects proposed in accord with your views? What do the proposed projects have in common?

Bergdoll: We have chosen a number of projects with quite distinctive architectural solutions. What is interesting is that all these projects have in common a desire to create an intermingling of interior and exterior spaces in very contemporary ways. What I have come to understand is that Korean architecture, even if modern, incorporates elements of the past so that the architecture of the 21st century contains certain Korean qualities.


Should the new museum be created with an eye to the art forms it will later accommodate - media art, for example?

Bergdoll: I think the combination strategy is the best. Existing art is extremely diverse and art is open to further change. Accordingly, an art museum should provide interesting canvases with which artists can actually work.

In the spectrum between spaces that are fixed and those that are flexible, it is more important for a space to be flexible, because we don’t know where the practices [of art] are going, amid the changing media landscape. Various [art] programs are now focused on media art but, as the media is changing very fast, we don’t know the future.

The most fascinating thing about museums is that, despite the development of the Internet and other media, people are still coming to museums, unsatisfied with seeing artworks through the media alone. Museums around the world are becoming more popular due to their public nature. Now, a museum is one of the places people go for direct experiences - exchanges with artists and exchanges with another viewer. The new museum should be a public-oriented architectural space.

Pogacnik: One of the most important things is that the new museum must be a public space flexible enough to accommodate various kinds of art, including performances and music concerts. We have seen the projects in which such ideas were reflected.

As for the new museum in the DSC headquarters, the land is limited and the height of the new building is also limited. Accordingly many architects have put the main exhibition halls underground, while describing the courtyards above the ground in their ideas.

As the jury, we will offer our thoughts and ideas to the chosen five teams, who will reflect all of these discussions in the second proposal drafts. 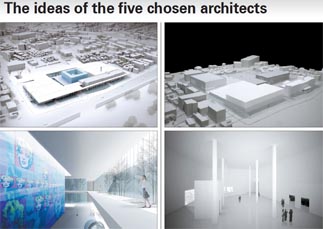 Meanwhile, Bergdoll picked the Kimbell Art Museum in Texas as his favorite museum for architecture, citing the “serenity” that its seemingly simple and primitive spaces, actually based on high-end engineering technologies, bring to the viewers.

Pogacnik picked the 21st Century Museum of Contemporary Art in Kanazawa, Japan, emphasizing that life near the museum is also important.