The Chinese at the Jeogyu Mountain Range

The Chinese at the Jeogyu Mountain Range 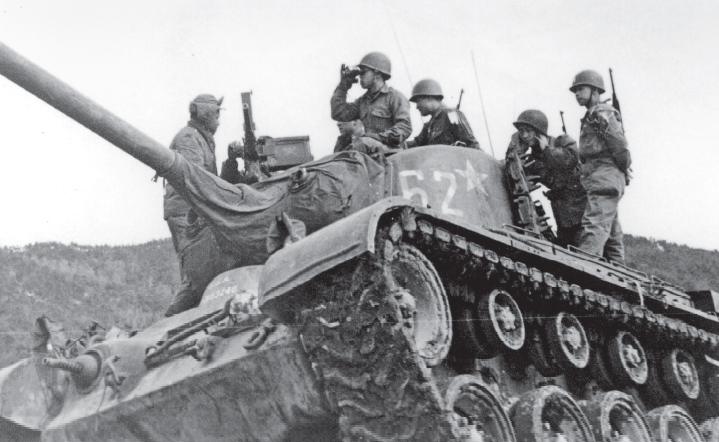 A South Korean soldier and U.S. servicemen on top of a M46 Patton tank during the Korean War. The tanks belonged to the U.S. 8th Army’s 6th Reserve Battalion’s C Company but were playing a supporting role for the ROK 1st Division. Provided by General Paik Sun-yup.

Last week Paik Sun-yup described the moment he first realized that China had entered the Korean War (1950-1953). It was October 1950 and the Korean army had captured a Chinese soldier...

After the initial interrogation of the Chinese prisoner, my mind raced frantically toward an answer I already knew. The prisoner had said himself that he had been a former Chinese soldier of the Kuomintang Army who had participated in the civil war in the south of China. From the conversation with him I concluded that a large Chinese Communist force was hiding at the Jeogyu Mountain Range. Alerting our U.S. allies as soon as possible was the only thing that came to my mind.

At the time, the ROK 1st Division was under the command of the U.S. 2nd Corps. The commander of the 2nd Corps, Gen. Frank Milburn, had already passed through Pyongyang and was at Sinuiju so he was the first one I contacted. He arrived immediately at the ROK 1st Division’s headquarters to hear for himself what I had just heard. After showing him our Chinese prisoner I helped with the interpretation as the general interrogated him. After it was over I emphasized that “the Chinese military intervention is clear.” General Milburn immediately understood the graveness of the situation and reported his findings to Gen. Douglas MacArthur, who was giving his war orders from Tokyo.

The commander of the 12th Regiment, Col. Kim Jeom-gon, asked me to conduct a reconnaissance mission on the front line using a U.S. tank platoon. The reason for this was there was an urgent need to find out who exactly it was the regiment would be dealing with. To carry out the mission, I sent an M46 Patton tank platoon consisting of five tanks to the 12th regiment. 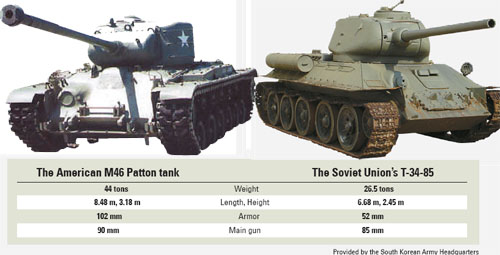 The tanks belonged to the U.S. 8th Army’s 6th Reserve Battalion’s C Company, but were playing a supporting role in my division as I had made a request to General Milburn for assistance.

The tanks were the latest models available and had been stationed in Korea just a year before the Korean War broke out. The tank had derived its name from the famous U.S. Gen. George Patton, who had shown his genius in tank warfare during World War II.

The mission yielded immediate results as the tanks that were feeling their way through the terrain in front of the regiment ran into enemies. Colonel Kim recalled the situation as follows:

“The tanks that had gone on reconnaissance came back after a good while. But when I saw the returning column I thought that there was something odd about it. Two of the five tanks had turned completely red in color.”

The reason the tanks had turned red was hair-rising. The two lead tanks that had paved the way for the rest of the tank column had suddenly been ambushed, when Chinese Communist soldiers emerged out of the mountains and attacked the two lead tanks. In order to drop grenades inside the tanks they had tried to open the tanks’ hatches by jumping on the turrets. At first, the U.S. soldiers were taken aback but as many of them were veterans of World War II, they found their composure soon and reacted shrewdly. They immediately opened fire on the enemy troops that had climbed up on the tanks.

Locking the hatches from the inside, the tanks communicated with each other over the radio. The two lead tanks took turns firing their machine guns against the Chinese soldiers that had jumped on the tanks. When the lead tank turned its turret to the left, the tank behind it would fire its machine gun and kill off the soldiers that were hanging on to the lead tank’s turret. Meanwhile, the Chinese soldiers trying to climb up the right side of the tank would get the same treatment when the tank turned its turret to the right. When the enemy tried to climb the tank in the rear, the lead tank would turn its turret backwards and kill off the enemy soldiers in the same way it had gotten rid of them itself.

The battle went on this way for quite some time but in the end the tanks prevailed.

When they returned, they created quite a stir within the whole unit. Seeing two tanks completely soaked in blood was more than enough for the rumor mill. According to General Kim’s memoir, a strange thing happened when the tanks returned. Upon arriving at the base, a tank gunner jumped from the blood-soaked tank and started running, making incomprehensible sounds as he went. The tank platoon commander went off in pursuit of the soldier to calm him down and finally had to tackle him to stop him from running around like a crazy man. Needless to say, the soldier had lost his mind amid the carnage as the fear he felt became relentless.

So started the Battle of Unsan: Two blood-soaked tanks and a G.I. gone mad. But that was only the beginning.

60 years with the military, by Paik Sun-yup
Translated by Brian Lee [africanu@joongang.co.kr]

The tanks that changed the war

The tank was a key fighting vehicle that changed the course of the Korean War (1950-1953). The old T-34-85 Soviet tanks employed in North Korea’s service devastated the South Korean ranks. The ROK military had no weapons in its arsenal that could stop it. The T-34-85, which had been deployed against German tanks during World War II, had demonstrated its superiority in numerous battles, including the Battle of Stalingrad. North Korea had 120 T-34-85 tanks in its possession at the outbreak of the war in June 1950.The North Korean forces had dictated the pace of the war with the help of the T-34-85 but the situation changed in August of 1950 when the United States’ M46 Patton tank was thrown into battle. The M46 had an armor that was twice as thick as that of the T-34-85, at 102 millimeters (4 inches), while its main gun, at 90 mm., was bigger than that of the T-34-85, which had a main gun that was 85 mm. Two-hundred Patton tanks were deployed to the Korean Peninsula through the end of the Korean War.