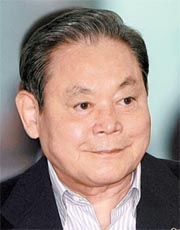 The 67-year-old regained his membership after an 18 month absence. Lee had stepped down from his chairmanship of Samsung Group and voluntarily gave up his IOC membership in July 2008 after a tax evasion charge. He was subsequently convicted and handed a suspended sentence and a 110 billion won ($89.2 million) fine.

In December, the Korean government pardoned Lee, saying it hoped the action could help Pyeongchang’s third consecutive bid to host the Winter Olympics.

The IOC reinstated Lee at a committee meeting held in Vancouver on Monday. With the Vancouver Winter Olympics set to kick off on Friday, Lee is expected to attend the upcoming IOC committee meeting on Thursday. The meeting will be Lee’s first since July 2007 in Guatemala. Lee and former taekwondo gold medalist Moon Dae-sung are the only Korean IOC members.

Lee, one of Korea’s most influential businessmen, is the son of Samsung founder Lee Byung-chull and served as the Samsung Group chairman for 20 years before stepping down in 2008. Lee’s return to the IOC is expected to significantly boost the bid for the 2018 Winter Games by Pyeongchang, Gangwon.

Having narrowly lost to Vancouver, Canada and Sochi, Russia in previous bids, the Pyeongchang Olympic Committee is currently up against Annecy, France and Munich, Germany. The three candidates will submit a reply to a detailed IOC questionnaire by March 15. The IOC will decide by June whether to include all three candidates in the final evaluation process. The IOC will name the host at a committee session in Durban, South Africa in July 2011.