In repeat, head of MBC hands in his resignation

In repeat, head of MBC hands in his resignation 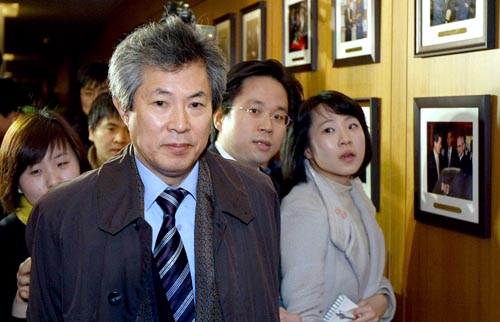 MBC President Ohm Ki-young, walks into a board meeting called by The Foundation for Broadcast Culture, the largest shareholder of the nation’s second largest broadcaster, yesterday morning at Lotte Hotel in central Seoul. [YONHAP]


To protest the picking of board member candidates by the major stakeholder of Munhwa Broadcasting Corporation, MBC President Ohm Ki-young yesterday announced his decision to step aside.

The Foundation for Broadcast Culture, the largest shareholder of the nation’s second largest broadcaster, hosted a board meeting yesterday morning and named three candidates to join the board of directors.

Ulsan MBC President Hwang Hee-man was named the chief of the broadcaster’s news division, while Yoon Hyeok, deputy chief of current affairs division, was chosen to be promoted as the division chief. Ahn Kwang-han, program bureau manager, was selected to head the program division.

The posts had been left vacant for two months until yesterday’s nominations. Ohm resisted the board’s decision to name candidates that he had not suggested.

Shortly after the board meeting ended, Ohm told reporters that he will resign to protest the nominations.

“It’s inevitable to deeply question the meaning of the existence of The Foundation for Broadcast Culture. What am I supposed to do?” Ohm said. “I will resign as MBC president.”

The MBC labor union also held meetings and discussed measures to counter the current situation, including the possibility of a general strike.

“We have not heard officially from Ohm that he will resign,” an official of The Foundation for Broadcast Culture said. “As of now, there was no discussion about a successor either.”

The foundation holds a 70-percent stake in MBC. Ohm was named the 28th president of MBC in March of last year and was the TV network’s longest serving news anchor. Ohm’s tenure was scheduled to end in February 2011.

Ohm’s latest offer to resign came only weeks after The Foundation of Broadcast Culture reappointed him to the post. Last December, Ohm and seven other executives of MBC offered to step down to seek a confidence vote following continuing criticism by the foundation over their “poor management oversight.”

Reappointing Ohm at the time, the foundation said they decided to keep the anchor-turned-top-manager in recognition of his management achievements