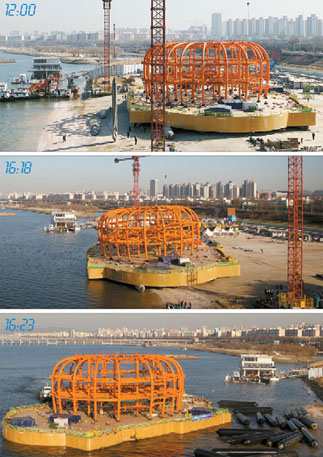 One of the three artificial islets from the Seoul Metropolitan Government’s “Floating Island” project is set afloat on the Han River near the Dongjak Bridge on Saturday. The islet with a three-story structure, named Viva, is the second largest of the three, with the base measuring 85 meters (279 feet) long, 49 meters wide and 3 meters high. It weighs in at 2,000 tons. It will be used mainly for entertainment and cultural events. The photos show the process of launching the islet, which took five hours and 20 minutes in total for completion. [YONHAP]