Events for a beloved cardinal

Events for a beloved cardinal 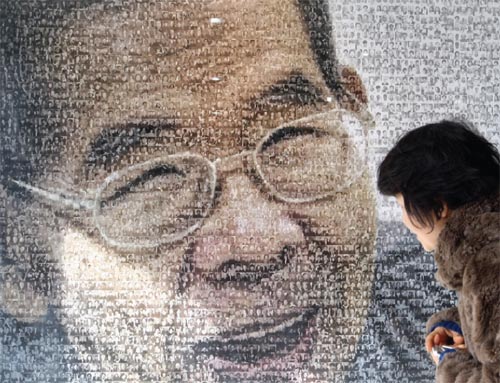 This large scale mosaic is made up of 1,200 photographs of the people Cardinal Kim met from all over the world throughout his life at Pyeonghwa Gallery next to Myeongdong Cathedral. By Byun Sun-goo


Cardinal Stephen Kim Sou-hwan was a beloved figure in Korea who passed away last year.

He was known for his messages of love and peace, as well as his advocacy on behalf of underprivileged populations.

To commemorate the first anniversary of the cardinal’s death on Feb. 16, there are a number of events happening around the city this month and next, including exhibitions, performances and concerts.

The cardinal’s voice provided the inspiration for a sculpture by artist Lee Gwan-young, who is the director of a volunteer program at Hanhwa Group.

Lee creates “voiceprints” from recorded sound wave patterns. He selects various shapes from among the recorded patterns and then applies them to paper, sculpture and other objects. Last year, Lee used the word “hope” as spoken by U.S. President Barack Obama to create prints and sculptures that he called “Hope Trees.”

To create the sculpture for Cardinal Kim, Lee extracted the shape of a crucifix from the sound waves of the cardinal saying the word “love” and used it to create a print and a sculpture in the shape of a tree and gold and silver jewelry.

“You can feel the love just by listening to his voice.”

Meanwhile, the Pyeonghwa Gallery next to Myeongdong Cathedral (02-727-2336), is showing 100 photos of the late Cardinal at various points throughout his life - his youth, his appointment as a cardinal and his charity and volunteer work - in an exhibit that runs until Friday. The exhibit will then move to a location in front of the cathedral from Feb. 16 to 28.

The exhibition, by photographer Kim Kyeong-sang, is divided into three themes: “Thank you. Please love one another,” “Light and Salt” and “Rest in Peace. The exhibition will also display Kim’s photographs of other renowned religious figures such as Mother Teresa, Pope John Paul II and St. Maximilian Mary Kolbe.

In Hapjeong, the Jeoldusan Martyrs’ Museum will show the Cardinal’s personal keepsakes and mementos, including his French textbook, his Vatican passport and his bishop’s ring, which has an engraving of a quote from Pope John Paul II. The exhibit is Feb. 18 to May 23 (www.jeoldusan.or.kr).

A commemorative concert for Cardinal Kim will be held at the Seoul Arts Center at 8 p.m. on Feb. 18. It will feature the music of the Trinitas gospel choir and chamber orchestra.

Cardinal Kim was a senior cardinal of the Roman Catholic Church and the former archbishop of Seoul. He was appointed cardinal-priest of San Felice da Cantalice a Centocelle by Pope Paul VI in 1969 and, at the age of 46, he was the youngest member of the College of Cardinals at that time.

After Kim’s health began to deteriorate in 2007, he passed away in Seoul on Feb. 16, 2009, of complications from respiratory problems.