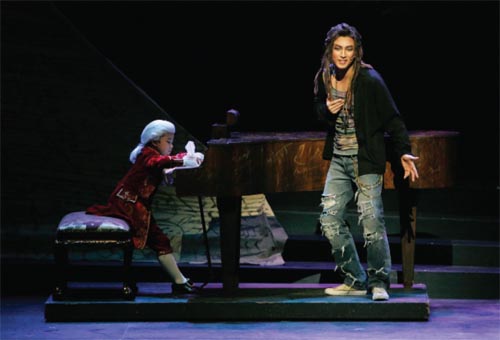 Park Geon-hyeong, right, and Kim Hyo-jun in a scene from the Korean production of the musical "Mozart!" which takes an intimate look at the composer's life. Provided by EMK Musical Company


If you’re expecting an epic tale filled with brilliant breakthroughs, tragic love and thrilling rivalries, you won’t find it in the Korean production of the musical “Mozart!” What you will see, however, is a more intimate portrait of the composer and the struggles that he goes through with his family and friends.

“Korean viewers like and may expect to see the rivalry between Antonio Salieri and Mozart, as shown in the movie ‘Amadeus’ - and so did I at first,” says Yoo Hee-sung, the director of the musical who is also the arts director for the Sejong Center for the Performing Arts.

“But as I worked with the story, I began to see that the simplicity of the story highlights the lonely life of the boy genius.”

The musical begins with scenes of Mozart as a young boy as his father pushes him to use his musical gifts to amuse the wealthy. His father’s ambitions continue to constrain him through his young adult years.

The musical uses a couple of innovative devices to help the audience identify with the character.

To portray the inner struggle Mozart was going through during this time, a young child actor appears alongside the adult actor playing Mozart every time the character goes through a difficult time or has a musical breakthrough.

“We see Mozart as a boy and as a young man. By showing the two sides, we see him as human - how much he yearns for his father’s approval and his isolation from the rest of the world,” says the director.

To highlight Mozart’s characteristics as a vibrant and ambitious young man, the adult Mozart is costumed in a tie-dyed shirt and torn jeans, while the rest of the cast is clothed in traditional costumes.

The director also emphasized that it was important to find an actor who could express the powerful energy the character possesses while also showing Mozart’s vulnerability.

“I was looking for witty and unpredictable actors that could also show the sadness Mozart felt within,” Yoo said.

“We have four actors playing the adult Mozart right now and they all bring elements of their own personalities to the character.”

One of the actors signed to play Mozart brought to the production not only his personality but also his star power.

When it was announced that Xiah Jun-su, a member of the popular K-pop boy band, TVXQ, would play the musical’s title character, the show sold out all 45,000 seats of its 15-performance run in just three hours.

“I knew that casting a star like Xiah would have enormous ticket power,” Yoo admitted. “But that’s not the only reason. Idol stars have a way with the public; they know how to melt into the setting that is given to them and they know how to please their fans. Also, casting a young idol as Mozart, an idol from days gone by, creates an interesting clash of old and new.”

The other actors playing the role of Mozart are musical theater actors Im Tae-Kyung, Park Geon-hyeong and Park Eun-tae.

Park Geon-hyeong, who is known for his appearances on television and film, talked about the difficulty of playing the renowned composer.

“I felt the pressure of playing such a famous person, and even though many considered Mozart to be almost godlike because of his talent, I did my best to express his regular side. I tried to express Mozart’s music through my acting.”

The Korean production is one of only five licensed productions of the musical outside of Austria and the first Austrian musical ever shown in Korea, Yoo said. The musical has also been staged in Germany, Sweden, Japan and Hungary.

“The VBW [Vereinigte Buhnen Wien, or United Stages Vienna, which holds the production rights] only allows theaters with the highest quality to produce the work and it is very fussy about the conditions in which the musical can be presented,” he added.