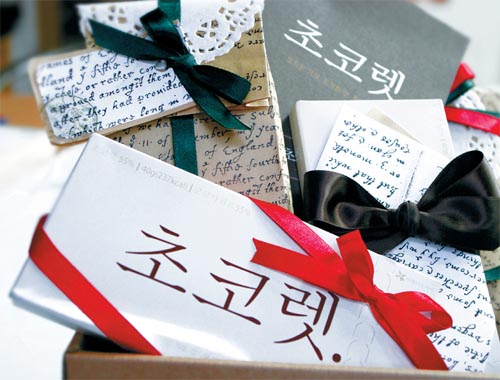 The Beautiful Store is currently selling fair trade chocolate at all of its stores nationwide. Its chocolate will be sold at convenience stores beginning tomorrow, just in time for Valentine’s Day. Provided by the Beautiful Store

But what would you say if you knew that this symbol of love and care had been produced using child labor or other exploitative production methods?

The fair trade movement, which is well established in other countries, attempts to counter practices such as those with a system that aims to help producers in poor countries earn a fair price for their goods.

The movement has come to Korea in the form of coffee and chocolate.

There are two major brands of fair trade chocolate to choose from, with more products likely to come as the movement gains momentum.

According to the Korea Fair Trade Association, a nongovernmental organization, the fair trade movement began to take off in Korea a few years ago when a documentary about the cacao business was shown here. In the video, there is a story about a young Ghanaian boy who climbs up a two-meter-tall cacao tree, risking his life to harvest a crop that would only pay him a couple of cents a day. The story evoked both the sympathy and wrath of the public, who were outraged at both the treatment of the boy and the gravity of his situation. 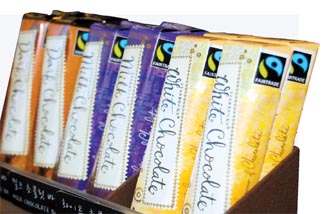 The fair trade movement guarantees that the producers of goods and services receive proper payment for their work and helps put an end to child labor because raw materials are exchanged directly between producer and buyer without the middlemen.

The Beautiful Store, run by a local nonprofit organization, released a new fair trade chocolate product in January. Yoon You-mi, a volunteer manager at the Beautiful Store branch in Apgujeong-dong, southern Seoul said that the product has become more popular as awareness about fair trade practices has grown.

“More and more people are visiting the store asking for fair trade chocolates,” she said.

Although the price for a 40-gram block of chocolate is 2,000 won ($1.70), or almost double the price of most chocolate sold by local companies, the store sold almost 150 million won worth of the chocolates in the two weeks after its introduction and Beautiful Stores around the nation are now out of the product.

The chocolate is produced in Naranjillo, Peru, and almost half of the chocolate’s 2,000-won sale price goes back to Naranjillo cacao farmers, according to the store. Naranjillo is the first cacao-producing area to be certified by the Germany-based Fairtrade Labelling Organizations International, a consortium of 24 organizations that work to set standards for and support fair trade industries.

The Beautiful Store’s chocolate sales were so successful that the company decided to start selling the product through Family Mart, which has convenience stores throughout the nation. The chocolate goes on sale tomorrow. It will be the first time that a fair trade product will be sold in a convenience store.

“Actually, we have been preparing to launch fair trade chocolate for two years,” said Um So-hee, an assistant administrator of the Beautiful Store. “The problem was looking for retailers because most retailers didn’t yet recognize the significance of fair trade products. But interest in these products has increased, so this year we were finally able to get convenience stores to sell it.”

And it seems that there will be no shortage of demand. 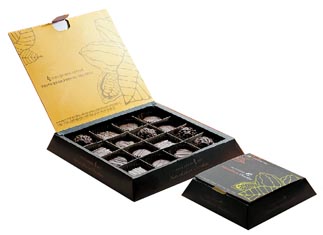 As Kim Yoon-jin, a 19-year-old part-time employee at a Family Mart in Cheongdam-dong, southern Seoul, said on Saturday, “So many people come in and ask for fair trade chocolates.”

Song Seul-ki, who was at the Family Mart to pick up a bar of the Beautiful Store chocolate, which the convenience store was selling in a test run prior to its release, was one of them.

“At first, I just bought one for myself at the Beautiful Store, just to try it,” said the 22-year-old student who calls herself a chocoholic. “The taste didn’t knock my hat off but it was actually quite nice and I finished the whole bar on the spot. And the feeling you get from participating in a heartwarming charity makes the chocolate sweeter.”

The product is named simply “Chocolate,” and is packaged in plain paper.

The Beautiful Store is not the only company selling fair trade products.

The fair trade movement has been gaining ground around the world, especially after an increasing number of companies were cited for unfair trade practices. Most companies seek to minimize production costs for maximum profit, but when a goal like that is abused, it becomes an unfair trade.

According to the U.K.-based Fairtrade Foundation, there’s nothing wrong with the cacao trading system. The problem is how much cacao farmers and producers receive for their labor - usually a mere 5 percent of the retail price. An unfair trade happens every time we buy a bar of chocolate or drink a cup of coffee. And it can happen with other products, too.

Fairtrade Labelling Organizations International gives products a fair trade logo if they are manufactured in FLO-certified factories with raw materials from FLO-certified farms and distributed to by FLO-certified distributors. The FLO determines a minimum price that a buyer of fair trade products must pay the producer to cover the cost of sustainable production.

According to the Fairtrade Foundation’s Web site, producers from underdeveloped countries receive about 30 percent more of the profit for fair trade chocolates.

Park Chang-soon, the president of the Korea Fairtrade Association, said he realized that “every cloud has a silver lining” through the increasing popularity of fair trade chocolates. “It was sad to find out that only 15 percent of Korean citizens know about fair trade products and that even among them, there are many skeptics. Some say that these products will be of little help to poor producers in underdeveloped countries and some complain that fair trade products are too expensive. I just wish that the recent popularity of the products will never become just a passing phenomenon.”

And some say that fair trade is just not fair.

According to a study released by the Adam Smith Institute, a U.K.-based think tank, “by guaranteeing certified farmers a minimum price for their goods, fair trade is distorting local markets and doing little to aid economic development.”

Consumers like Kim Chang-seok would agree. Kim, 35, who was visiting a Family Mart in Cheongdam-dong, said, “A ‘fair trade’ label does not endorse all of a company’s business practices,” meaning a company can produce both fairly and unfairly traded products. “Some large businesses only adopt FLO-certified products for limited products, because they are eager to elevate their image.”

Starbucks Coffee is one of the companies receiving such criticism. The company began purchasing fair trade-certified coffee in 2000, but it is not used in all of the company’s products.

According to Starbucks Coffee Korea, as only 4 percent of the world's total coffee production is FLO-certified, it is difficult for it to import a greater amount. The company says its goal is for 100 percent of its coffee to be ethically traded under its own guidelines, which include FLO-certified products, by 2015.