Sale: Score one for skating scandals

Sale: Score one for skating scandals 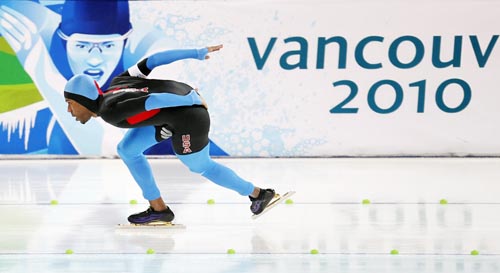 
VANCOUVER - Judging controversies and a baffling scoring system have left figure skating struggling to pull in the fans, and Olympic champion Jamie Sale believes there is one good way for the sport to regain its popularity - more scandals.

“We need some fights! That scandal [between] Nancy [Kerrigan] and Tonya [Harding] made skating popular. We need some fist fighting,” Sale told Reuters in a telephone interview as she burst into laughter.

“It’s silly. I’m just kidding. But every sport has got its problems. TV [figures] and live [attendance] is down. I don’t know what it’s going to take to make it really, really popular again.”

Officials are likely to roll their eyes at Sale’s suggestion, but any die-hard figure skating fan will know that the 2002 Olympic pairs gold medalist is not too wide of the mark. Whereas once a mesmerizing performance could turn competitors such as Britain’s Jayne Torvill and Christopher Dean into household names, over the past two decades the only skaters who have left a lasting legacy are those who hit the headlines for all the wrong reasons.

Remember the year Alexei Urmanov and Oksana Baiul won the men’s and women’s gold medals at the Winter Games? No? While their powerful jumps and artistic choreography may not prompt a flood of memories, few can forget the Kerrigan-Harding saga that overshadowed the whole of the 1994 Olympics.

Kerrigan gained worldwide sympathy when, just a few weeks before the Games, she was hit in the knee with a baton in an assault planned by rival Harding’s ex-husband, Jeff Gillooly. The ploy to sideline Kerrigan backfired and the American became the story of the Lillehammer Olympics when she grabbed the silver behind Baiul.

Similarly Sale and her now-husband, David Pelletier, were thrust into the spotlight at the 2002 Games when a judging controversy erupted. They were belatedly awarded duplicate gold medals in the pairs competition after a French official admitted she had been ordered to mark them down.

“As much as it wasn’t a pleasant thing to go through, it turned out better for us as we became household names, in the U.S. especially. People still talk about it today and that wouldn’t have happened if we won the gold outright,” said Sale, who will be in Vancouver as a commentator.

That incident led to a major scoring overhaul, with the old 6.0 system replaced by a cumulative scoring system that has bewildered fans and pundits alike since it was introduced following the Salt Lake City furor.

All this has hit figure skating hard.

“There was so much pressure to make changes that they felt that they needed to do something,” said Sale. “Just like they gave us the gold medal to shut people up, and with people going ‘this has gotta change, this sport is so bad, it’s been like this for so long, I don’t want to watch it anymore’. So they thought, if we make the [scoring] system a little different, it seems more fair.

“People always felt [before] it was biased but now the scoring system, I don’t understand it. It all seems contrived. It seems [the judges] can hide now. It’s even hurt pro skating [in ticket sales].

“It impacted the whole sport. It totally hurt our sport. Everyone I know is fed up with skating.”