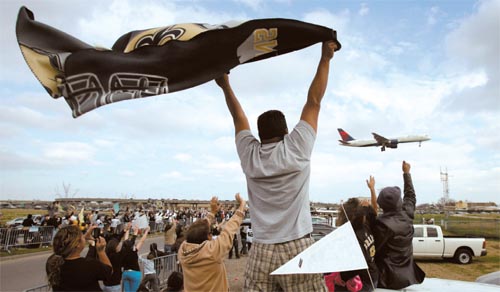 
NEW YORK - The New Orleans Saints’ victory over Indianapolis in the Super Bowl was watched by more than 106 million people, nosing out the 1983 finale of “MASH” to become the most-watched program in U.S. television history, the Nielsen Company said Monday.

Compelling story lines involving the city of New Orleans and its ongoing recovery from Hurricane Katrina and the attempt at a second Super Bowl ring for Indianapolis quarterback Peyton Manning propelled the viewership. Football ratings have been strong all season.

“It was one of those magical moments that you don’t often see in sports,” said Sean McManus, president of CBS News and Sports.

The MASH record has proven as durable and meaningful in television as Babe Ruth’s record of 714 home runs was in baseball until topped by Hank Aaron. Ultimately, it may be hard to tell which program was really watched by more people. There’s a margin for error in such numbers, and Nielsen’s Monday estimate was preliminary, and could change with a more thorough look at data that was due yesterday.

“It’s significant for all of the members of the broadcasting community,” said Leslie Moonves, CBS Corporation CEO. “For anyone who wants to write that broadcasting is dead, 106 million people watched this program. You can’t find that anywhere else.”

Moonves predicted CBS will earn more in advertising revenue than in any other Super Bowl. The good ratings for the game and football in general also set up CBS and other football broadcasters well when selling advertising for next season, he said.

The Nielsen estimate also drew some congratulations from Alan Alda, the star of MASH, and the slugger whose record was beaten.

“If the MASH audience was eclipsed, it was probably due in large part to the fact that the whole country is rooting for New Orleans to triumph in every way possible,” Alda said. “I am, too, and I couldn’t be happier for them. I love that city.”

There are more American homes with television sets now [114.9 million] than there were in 1983 [83.3 million]. An estimated 77 percent of homes with TVs on were watching MASH in 1983, compared with the audience share of 68 for the Super Bowl.

Nielsen also measures only the United States, and it’s possible some World Cup soccer games were seen more worldwide. Accurate measurement of television audiences outside the United States is spotty at best.

Alda also wondered whether the numbers were too close to declare a new champion. He thinks Nielsen didn’t take into account large numbers of people watching MASH communally, which is often the case for football games, too.

“Not to say I’m competitive, but in part we are talking about sports,” he said. “And I actually am competitive.”

McManus didn’t want to jinx it, but the abnormally strong viewership for football this year left him hoping for a record. The National Football Conference and American Football Conference championship games both had their biggest audiences since the 1980s. The growth of high-definition television and its appeal to sports fans has also helped.

A competitive game until the final minutes. McManus acknowledged some nervousness when Indianapolis jumped out to a 10-0 lead - a Super Bowl rout often makes people turn away from the game - but New Orleans roared back.

The Mid-Atlantic blizzard also helped CBS. After New Orleans, the highest-rated market was snowbound Washington, Nielsen said. More people watched the game from their homes in that area instead of going to parties or bars, and Nielsen does a much better job counting viewers in homes than outside of them.

“Bad weather in the Northeast and good weather in Florida was a good combination for us,” McManus said.