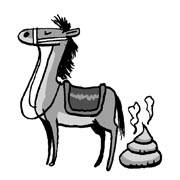 Horses produce as much as 11 kilograms, or more than 24 pounds, of waste each day. When horse-drawn carriages were the main means of transportation, the streets of urban areas smelled badly of horse droppings. The reason why houses in New York City had stairs leading up to the door was because the street overflowed with water tainted by animal excrement.

In the early 19th century, an international conference on animal waste in urban areas was held in New York, but it failed to find a solution. The war on horse droppings ended only after motor vehicles began to be mass produced.

Automobiles, however, brought about the danger of traffic accidents. When the competition among car manufacturers heated up, the vehicles started to be equipped with necessary safety features. As usual, though, consideration for passenger safety came at a later stage.

Seat belts were introduced only in the 1950s. Robert McNamara, “the architect of the Vietnam War” and future United States secretary of defense, while working at Ford Motor, became an architect of a safety belt for automobiles.

While rising through the ranks to eventually become Ford’s president, McNamara recommended the use of safety belts like those used in aircraft to reduce the number of injuries and deaths from automobile accidents. Accordingly, Ford Motor started to provide safety belts as an option, but the consumer reaction to the idea was rather cool. Consumers thought safety belts gave the impression that cars were not safe.

The publication of the book “Unsafe at Any Speed” in 1965 by Ralph Nader, then an American attorney and consumer protection lobbyist, provided a dramatic turning point.

He revealed the fact that the rate of fatalities of automobile accidents was high due to such structural problems as sharp metal gauges and loose doors, even if drivers did not speed. He also criticized the lukewarm attitude of automakers that hesitated to provide safety devices out of fear that they would increase car prices or make consumers turn their backs, as was the case with Ford. He pointed out that automakers spent only 23 cents per vehicle to improve safety features at that time, while they spent $700 on design improvement.

Since then, the safety standards of automobiles have improved drastically owing to related laws and strong consumer pressure.

Recently, uneasiness over auto safety has risen high again, because major automakers such as Toyota, Honda and Ford have started recalls. Some say that the chances of mechanical failure go up when the number of electronic parts increases. It’s frightening that carmakers don’t know the exact causes of these failures. Moreover, auto executives take an attitude of caring more about their company’s interests than the consumer’s safety. I wonder whether the smell of horse droppings could be more endurable than unreliable automobiles.