[In-depth interview] Korea aims to have the ‘smartest grid’

[In-depth interview] Korea aims to have the ‘smartest grid’ 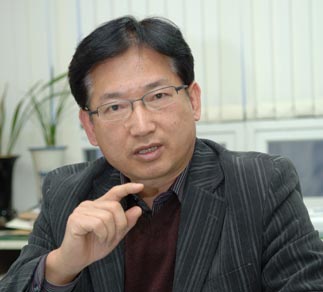 Esoteric as it may sound, smart grid has become a buzzword in Korea these days at the government’s push.

The real-time electricity monitoring network that incorporates information technology to maximize the efficiency of power distribution is being promoted as one of a few sectors that Korea can bet its future on. Indeed, the government sees the technology as a high stakes priority.

The 20-year road map for smart grids, announced by the Ministry of Knowledge Economy last month, aims to cut cumulative oil imports to Korea by 440 million barrels, worth roughly 47 trillion won ($40.33 billion), by 2030 by reducing power consumption through smart grids.

The domestic market for smart grids would grow to amount to 74 trillion won by 2030, creating 50,000 new jobs annually by then, the plan showed. The potential of the market is so massive partly because commercialization of electric cars and development of renewable energies are closely associated with smart grid technologies.

To make that happen, the ministry is planning to inject funds from the government and private sector worth a total of 27.5 trillion won into building a nationwide smart grid infrastructure by 2030. A special law for smart grids will be established within the year, the ministry said.

Kim Dae-kyeong, director of the smart power facility research center at the Korea Electrotechnology Research Institute, is a key architect of the road map. According to the Ministry of Knowledge Economy, he spearheaded the effort by researchers and government officials to draw up the blueprint of the 20-year project. Studying at the University of Manchester’s Institute of Science and Technology in Britain, he is also heading a state project in the electricity information and technology project.

In an interview on Monday, Kim further explained how the fuss over smart grids could be justified.

Q. Is “smart grid” a term that clicks with people in the rest of the world?

A. The focus is on why to develop smart grids and how to vary them among the United States, Europe, Japan and Korea. But all these countries are on the same page about what a smart grid fundamentally is, which is to incorporate the information technology infrastructure in the existing electricity network to make the use of electricity more efficient.

The government is pushing to make Korea a leading country in the smart grid sector. How plausible is the plan?

Korea is one of the world’s top 10 in terms of the effectiveness and management ability of the electricity system. It is also a powerhouse in the information and technology sector. So, in an area that puts the two sectors together, Korea should be in a better position to lead than many other countries.

I think it is getting off to a substantial start. Last August, the government broke ground on the country’s first smart grid test bed in Jeju.

If we go on at this pace, I think Korea can lead in many areas of the smart grid, if not the whole technology altogether.

Why do you say “if not the whole technology”?

Smart grids are a widely applicable sector, and many countries are already embarking on developing one aspect of the sector that they believe is the most needed and profitable for them.

Nevertheless, Korea should not limit its focus on a single area. It could heed efforts by the U.S., Europe and Japan and develop a business model that includes various aspects.

I suggest that Korea’s smart grid project focus on areas such as smart transportation, smart electricity service and smart renewables.

Smart transportation would utilize electric cars by setting up standards in how to charge them. Smart renewables would raise the efficiency of renewable energy usage by establishing a system for even power generation and distribution. The smart electricity service would give consumers a chance to sell electricity they save to encourage energy conservation.

Setting a technological standard is deemed to be important for leading the global smart grid market. Can that be done without cooperation with other countries?

Absolutely not. Even if Korea sets up a standard, it could be useless if the U.S. or Europe comes up with their own standards. The government is thus cooperating with the U.S. to make an internationally binding standard.

The Ministry of Knowledge Economy recently signed a memorandum of understanding with the U.S. state of Illinois’ Department of Commerce to set up a pilot program to create smart grid technology which it hopes to apply to the U.S. market. How significant is this collaboration?

The U.S. has the biggest electricity market in the world and thus laying these roots could be a launching pad to expand across the country. Successful smart grid management in the U.S. market would help raise Korea’s credibility and help to win bids in smart grid business in Europe and China.

With the experience of doing business in the U.S., it will be easier for Korea to expand into the global smart grid market than it was to get into the global nuclear power plant market.

What else would you like to say about smart grids?

With that in mind, many countries across the world are amassing their resources to develop smart grids, and Korea should not be an exception.