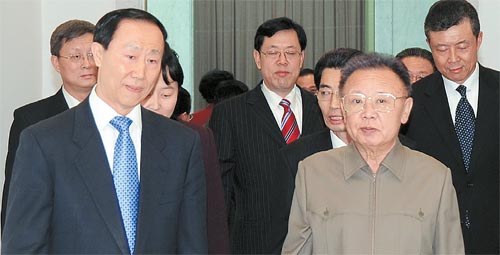 
In a move thought to be related to the possible reopening of the six-party denuclearization talks, Kim Gye-gwan, North Korea’s chief nuclear negotiator, arrived in Beijing yesterday.

Kim’s trip came a day after the North Korean leader Kim Jong-il met senior Chinese Communist Party official Wang Jiarui in Hamhung and reaffirmed his commitment to denuclearization. Kim Gye-gwan flew to Beijing in the same plane as Wang, who spent four days in the North. Kim was accompanied by Ri Gun, the deputy nuclear negotiator for North Korea. Kim’s itinerary wasn’t immediately available, nor was it clear whether he was carrying any message from Kim Jong-il.

A high-ranking South Korean nuclear official said he had known “well ahead of time” that Kim Gye-gwan would go to Beijing, but said he didn’t know much beyond that.

The nuclear official said he didn’t think efforts to revive the six-party talks had gained much traction.

“It’s premature at this point to assume any positive development has been made in regards to the resumption of the six-party talks,” he said. “The other parties involved [South Korea, the United States, Russia, Japan and China] must continue to pressure North Korea while keeping international sanctions in place.”

In contrast, another diplomatic source thought Kim’s trip and other diplomatic efforts were “a step in the right direction.” While he refused to predict when the six-party talks might resume, the source said, “At least these moves have generated a positive atmosphere.” He was referring to the meeting between Kim Jong-il and Wang. Around 1 a.m. yesterday, the North’s Korean Central News Agency reported that Wang, the head of the International Liaison Department of China’s Communist Party, delivered “a verbal personal message” from Chinese President Hu Jintao to Kim and that Wang and Kim had “a cordial and friendly conversation.” The report didn’t describe the content of the message but added that Kim “expressed thanks for this and asked Wang Jiarui to convey his regards to Hu Jintao.”

Hours later, China’s Xinhua News Agency reported in an English-language article that Kim reiterated to Wang the North’s “persistent stance to realize the denuclearization of the Korean Peninsula.” Xinhua said Kim stressed it was important for other nations in the six-party setting to be sincere and serious about resuming the talks. Xinhua said Wang delivered a letter from Hu in which the Chinese President wrote China was prepared to “make joint efforts with [North Korea] to maintain peace and stability on the Korean Peninsula.”

In another diplomatic effort, B. Lynn Pascoe, the UN’s under secretary general for political affairs, arrived in Pyongyang yesterday to begin a four-day visit. Pascoe plans to urge North Korea to rejoin the six-party talks and discuss its relationship with the UN, a UN official told the Associated Press.

The six-party talks were last held in December 2008. In response to international condemnation following the North’s long-range rocket launch in April of last year, North Korea vowed it would never again return to the six-party table. When the United Nations Security Council levied tough sanctions following the North’s nuclear test in May, the North declared the six-party talks “dead.” The North has since shifted between conciliatory and hostile actions. It has shown a willingness to return to the multilateral setting but has demanded sanctions be lifted.