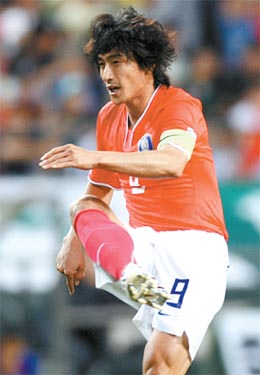 One of the names that stands out is former national team forward Ahn Jung-hwan, 34, of the Dalian Shide of the Chinese Super League. The Korea Football Association has asked Ahn’s team to let the veteran forward join the national team in March.

Come March 3, Ahn will play for the national team for the first time since June 22, 2008, when he played the World Cup qualifier against North Korea.

Since making his debut for the national team in April 1997, Ahn has scored 17 goals in 68 international matches for Korea. With the national team lacking depth at the forward position and its best forward, Park Chu-young of AS Monaco, out with a hamstring injury, manager Huh Jung-moo and his coaching staff are expected to give the veteran forward a long hard look in the upcoming friendly matches. Lee Dong-gook has not impressed the coaching staff and still hasn’t earned a spot, and others such as Noh Byung-jun, Kim Shin-wook and Lee Keun-ho have failed to prove their worth in the starting lineup.

While much of the attention is being paid to the return of Ahn, Korea will get a much-needed boost from the likes of Park Ji-sung, Lee Chung-yong, Ki Sung-yeung and Kim Nam-il in the midfield. With its top midfielders missing from the lineup, Korea has had difficulties mounting quality goal-scoring chances for its forwards.

Another problem is the defense, where injuries have led Huh to experiment with the lineup. Veterans Lee Young-pyo and Cha Du-ri are expected to provide stability and versatility to a Korean defense that has struggled at times in the recent past.