Skaters get up to speed despite size disadvantage

Skaters get up to speed despite size disadvantage 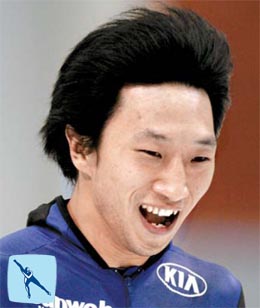 Unlike the action-packed short-track events, speed skating is an event which requires strength and long strides. It can be tough for Korean athletes to compete against European and North American skaters, who have a size advantage. At the 2006 Turin Winter Games, Korea’s Lee Kang-seok was the lone medalist with a bronze in the 2x500-meter event.

“The size disadvantage is partly true but there’s nothing we can do about that,” explained Baek Chul-gi, the director of the speed skating team for the Korea Skating Union and head coach of the Uijeongbu squad. “It all gets down to whether the athlete is in top shape on the day of competition.”

Korea will have two medal hopefuls in Vancouver. One is veteran Lee Kyu-hyeok, who is set to compete in his fifth consecutive Winter Olympics while still seeking his first medal. He first competed in the 1994 Lillehammer Winter Games and has qualified for every Winter Games since. Lee Kang-seok, a bronze medalist in the 2x500-meter event in Turin, is the other.

Lee Kyu-hyeok is the man to root for in Vancouver. Entering what will likely be his final Winter Games, Lee will be aiming for the medal as he competes in the 500-meter and 1,000-meter events.

The 32-year-old has said that he won’t rule out competing in the next Olympics, but has admitted this is his final shot at earning a medal.

“Lee is a veteran in the sport and this is his last chance at a gold medal, but that also means that he can use his experience to his advantage,” said Baek.

Lee Kang-seok, who earned Korea’s first medal in a speed skating event in his first Olympics four years ago, also has a good shot at finishing in the top three.

Lee Sang-hwa is the notable short-distance female skater on the squad.