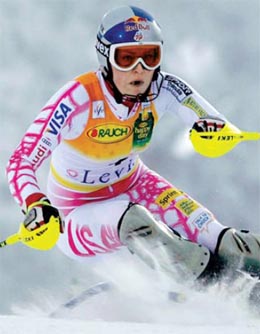 The host city that grew up at a time of 19th century gold rushes is braced for another stampede, this time of eager athletes brandishing skis and skates - and the occasional broom - rather than picks and shovels.

Vonn, Alpine skiing's golden girl, is favored to mine a rich seam up in the mountains at Whistler. The winner of every women's downhill bar one this winter, the American has dominated women's skiing since she struggled with injury after a training crash at the last Turin Games and has lived in the full glare of U.S. media attention in the run-up to Vancouver.

The 25-year-old Minnesota-born skier, who used to race under her maiden name of Kildow, has already won the World Cup super-G title and leads the overall, downhill and super-combined standings. She is also a past winner in slalom and combined. If all goes to plan, and the technical events are her weakest point, she could ski away with five medals from her third Olympics.

Vonn joins the "Flying Tomato", the moniker given to red-haired Olympic halfpipe champion snowboarder Shaun White, and speed skaters Shani Davis and Apolo Anton Ohno as the headline names in an invading U.S. team intent on over-running their northern cousins.

The free-spirited Ohno, a native of nearby Seattle, is already a familiar face, but the short-track skater plans on being remembered more as the United States' most decorated Winter Olympian. He already has five medals from two previous Games and, entered in four events, has every chance of skating past Bonnie Blair's American record of six.

Davis, who in 2006 became the first black man to win an individual Winter Games gold, is favorite to defend his 1,000-meter title and also holds the world record at 1,500 meters. White will be the man to beat at Cypress Mountain, a snowboarding superstar with a cult following who also ranks as probably the wealthiest athlete in the village thanks to endorsements running into the multi-millions.

Canadians, craving gold more than most after failing to take any from their two previous home Olympics (Montreal in the summer of 1976 and Calgary's 1988 Winter Games), also plan to "own the podium" in the mountains but are likely to be more fixated by ice hockey.

The sport has a near-religious status in the game's spiritual home, and the 2010 men's tournament could be one of the all-time highs with tickets for the final already on offer at $50,000 a pair. If that fails, there will always be brooms to sweep away the pain: Curling boasts more registered players in Canada than the rest of the world combined and their men and women are always rock steady.

The showcase men's downhill kicks off the Alpine programme on Saturday, the morning after an opening ceremony held indoors for the first time, as the highlight of the first day.