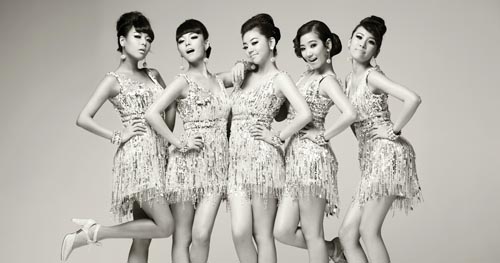 The Wonder Girls had a hit in the U.S. with the song ‘Nobody,’ which went to No. 76 on Billboard’s Hot 100 chart in October. [JoongAng Ilbo]

It is so difficult for Asian singers to break into the American market that success in the U.S. is a feat often compared to “the first human landing on the moon,” according to American pop columnist Joseph Young.

Singers that are ultrafamous in Asia, such as BoA, Rain and Se7en, each of whom earn more than a medium-sized Korean company, have proven that upon entering the U.S. market, their appeal just does not translate.

So when the Korean girl group the Wonder Girls made it onto Billboard’s Hot 100 chart in October, it was a significant moment for Korean pop music. The song “Nobody,” which entered the iconic music chart at No. 76, has a simple but addictive melody, and the five-member girl band, with their spangle-studded dresses and wholesome appeal, captured U.S. fans in a way no other Asian act has.

But it certainly hasn’t been easy for the band, and their success has come at a price.

Last month, band member Sun-mi, who goes by Mimi in the U.S., announced she was leaving the band to focus on her studies, a move that shed light on the difficulties Korean singers face when they burst into the American market.

In October, after the song Nobody had entered the Billboard chart, the band had a press conference in Seoul at which some of the band members, including Sun-mi, who was 18 then, cried as they shared their struggle to make it in the U.S. market.

“I cry every night before I fall asleep because I’m a slow learner and I need a lot of time to adapt to new circumstances,” Sun-mi said.

Band members said cultural and language barriers were the most difficult aspects of their U.S. life.

So it was no surprise that when the band’s managers were looking for someone to replace Sun-mi, they chose Hye-rim, a singer who is not only talented but fluent in four languages including Korean and English.

Their choice of Hye-rim, experts say, probably has something to do with the band’s success in the U.S.

“If you can’t speak the language, you can’t make it in the states, no matter how well you sing,” said pop columnist Park Eun-seok. “We have to remember that the most successful Korean actress in Hollywood is Kim Yun-jin because she is a native speaker.”

Kim, who was educated in the U.S., plays Sun Kwon on the TV series “Lost.”

Another problem Korean musicians encounter when they try to enter the U.S. market is the difference between the two countries in the way musicians gain recognition for their work.

In Korea, a star is born through a formal relationship between an entertainment agency, a producer and a composer. Talented musicians are carefully selected and then trained by an entertainment agency. In the U.S., however, musicians play local clubs for years waiting for recognition, after which they may be lucky enough to sign with a record label. Korean acts that try to make it in the U.S. often say they find it difficult to adapt to the U.S. system.

Music critic Lim Jin-mo advises bands to remember that “the Beatles sang for about six years at a small club before they became famous.”

Name recognition does not, however, guarantee financial success. JYP Entertainment, the Wonder Girls’ agent, says it spent a lot to promote the group and hasn’t yet broken even.

“It’s everyone’s dream to be successful in the U.S. because once you make it, you can sell your albums throughout the world,” said Park the music critic. “But it takes a lot of patience.”