A Chinese laundry for cash

A Chinese laundry for cash 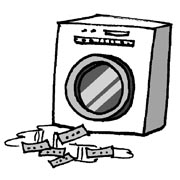 It is a well-known fact that history contradicts literature in its portrayal of Cao Cao, one of the central figures of the Three Kingdoms period in China. The novel “Romance of the Three Kingdoms” takes great creative liberties in describing his personality. Even nowadays, heated debate continues in China on how to re-evaluate the role this figure played in history.

It seems Korea suffers from a similar conundrum on Cao Cao, too. “The Story of the Three Kingdoms,” a novel written by Lee Moon-youl, describes Cao Cao as a good leader who was considerate enough to take care of the families of soldiers killed in war by providing them with land for cultivation.

On the other hand, Cao Cao is portrayed as a delinquent leader who laundered money in another version of the story written by Kim Jin-myung. Kim claims that Cao Cao amassed slush funds under the borrowed names of his relatives.

The latter story about Cao Cao might be a fabrication. Nevertheless, it’s not too far-fetched considering that a number of national leaders have tainted their names through involvement in money laundering.

Augusto Pinochet, former president and dictator of Chile, laundered $150 billion by using over 100 accounts at five banks in the United States. Riggs Bank in Washington, D.C., which managed 28 accounts under his name for 25 years, wrote he was “an expert who retired after amassing a fortune through legitimate means and achieved great success in his profession.”

In Korea, too, a few former presidents had to suffer humiliation due to allegations of their involvement in money laundering. It is an irony that they played a decisive role in making this crime common in our daily conversation.

When former presidents were arrested under suspicion that they accumulated slush funds, the term “money laundering” was mentioned frequently in the prosecution’s investigation reports and in press reports.

Naturally, it was treated as a newly coined phrase and included in dictionaries.

Some say the origin of the term had to do with cleaning. It is said that it was first used as slang when organized crime rings like Al Capone’s changed money they made through such illicit means as gambling and bootlegging into legitimate funds.

They did this by making “dirty money” clean through laundry shops run by Italian immigrants. It can be said that the simple business of doing laundry has been tainted by being connected to money.

Recently reports have emerged about a Taiwanese businessman who has started a “money washing” business cleaning actual dirty banknotes. He noted the Chinese tradition of parents giving fresh, new banknotes to their children to wish them good luck on the Lunar New Year.

As Lunar New Year is only days away, parents celebrating the holiday are preparing money to reward their children for their bows.

Regardless of whether the money is actually fresh from the bank or just washed, it will no doubt bring the recipients joy. More importantly, if the money is earned through hard work, it is the “cleanest” money in the world.