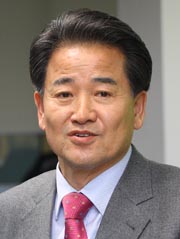 The Democratic Party yesterday readmitted Representatives Chung Dong-young and Shin Kuhn to its fold in a strategic move aimed at improving the party’s position in the local elections in June.

“I feel like I’m returning to my hometown after a long journey,” Chung said at a press conference after the decision, apologizing to his fellow party members for troubling them by his 2009 defection. “I will dedicate myself to open an era of a 30 percent approval rating for the Democratic Party.”

Chung added that he will do his best to form an alliance with liberals and reformists to bring a June victory to the DP.

“For victory in the local election, the grand spirit of unity was largely agreed upon inside the party, and we approved readmitting the two lawmakers,” said Woo Sang-ho, the spokesman of the largest opposition party. “Our network with the other opposition parties and our own internal unity will grow further.”

With the two lawmakers’ return, the Democrats now occupy 88 seats in the incumbent 297-member National Assembly.

Chung was the Democrats’ candidate in the 2007 presidential election, losing to Lee Myung-bak of the Grand National Party. He left the DP last April, only days before legislative by-elections, after the party decided to not nominate him as a candidate. Chung ran as an independent and was elected to represent the Deokjin district of Jeonju, North Jeolla.

Shin, who was formerly the chief of the National Intelligence Service, left the DP at around same time, and for the same reason. He too ran as an independent candidate, winning a National Assembly seat as the representative of Wansan, also in North Jeolla.

Last month, Shin and Chung asked the party to reinstate them, with Chung apologizing for creating friction.

Of the two men, it is Chung whose reinstatement is generating the most interest. A TV-journalist-turned-legislator, Chung had been a unification minister during the Roh Moo-hyun administration and the chairman of the Uri Party, the predecessor of the DP.

Although “party unity” is being used to explain Chung’s return, a power struggle between him and the current DP leadership seems inevitable.

At the press conference yesterday, Chung said, “What I am interested in is not holding power inside the party, but expanding the party’s power in the nation.” However, a bout between him and incumbent DP Chairman Chung Sye-kyun appears destined, since the party is scheduled to hold a convention to elect a new chairman in July.

Both men are expected to run for the post and have strong supporting factions. While Chung Dong-young has been largely supported by the lawmakers of Jeolla, Chung Sye-kyun is backed by pro-Roh liberal lawmakers, particularly those representing the capital region. Although rivals, the two Chungs have maintained a friendship for 15 years, ever since they established a private reformist group in 1996, along with other young liberal politicians.