Egis’ Jeon: An athlete, a gentleman and a scholar

Egis’ Jeon: An athlete, a gentleman and a scholar 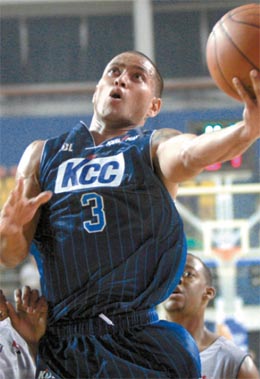 The KCC Egis’ rookie point guard Jeon Tae-pung is widely recognized as one of the Korean Basketball League’s best point guards. And the 30-year-old is an all-around near-perfect person off the court as well.

Koreans have a term for such people, eumchinah, which roughly translates as “son of my mother’s friend.”

The term is a humorous one, which in a way pokes fun at the manner in which Korean mothers compare their children’s scholastic and extracurricular activities, and also refers to those gifted types who draw the envy of such women.

Jeon is an eumchinah. He possesses top-notch dribbling skills and can slash to the basket without fear. Mobis Phoebus head coach Yoo Jae-hak said earlier this season that Jeon is the most skilled player in the league, and Jeon’s numbers back up the claim. He is averaging 13.5 points, the best among point guards, and 4.7 assists, fourth best in the league.

While Jeon’s abilities on the court speak for themselves, he is more than an excellent basketball player. Off the court, he also possesses all the qualities Korean mothers would drool over.

He is a graduate of Georgia Tech and played in the Atlantic Coast Conference of the NCAA Division I. The Yellow Jackets are one of the top teams in American college basketball and the school is also academically ranked in the top five among American technical universities.

In order to support her son, Jeon Myung-soon, 57, moved from Los Angeles to Atlanta, Georgia, when Jeon was awarded an athletic scholarship.

Jeon possesses the looks to draw the interest of female fans. But he also comes from a good family. He has an uncle who works for the accounting and financial systems division of the White House, and his eldest uncle is an executive at a large bank. Having served as a principal at various schools in the past, his aunt now works for the United States Department of Education.

“Tae-pung’s father’s side of the family is full of overachievers. They all attended college on academic scholarships,” said Jeon’s mother.

But like most eumchinah, Jeon is taken. He has been dating his childhood friend Mina Turner since soon after he was chosen first overall in the KBL half-Korean draft last February.

He first met Turner at the age of 8 at a church in Los Angeles. The two drifted apart when Jeon went off to college in Atlanta, but Turner had been in Korea for the past three years teaching English. Jeon asked her out after being drafted last year. The two have been a couple since.