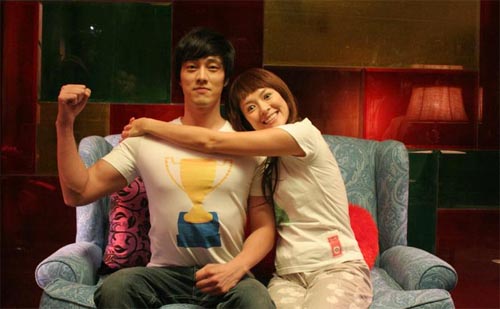 Korean actor So Ji-seob, left, and Chinese actress Zhang Ziyi star in “Sophie’s Revenge,” which was co-produced by companies from Korea and China and released last August. [JoongAng Photo]


The activity in the nation’s film industry in the first half of the year might best be summed up by the word “collaboration.” And with so many filmmakers, producers, actors and actresses from diverse countries teaming up to make films these days, the divisions between them are being blurred on screen and off.

The actors are Korean and Chinese, the director is Kim Tae-yong, a Korean, the film is being co-produced by Korean and American production companies and it is being shot in the United States. It is the most recent example of the kinds of cross-cultural collaborations in the film industry today.

“Teaming up could be advantageous when the film is distributed in other countries,” said Kim Jin-ah of the film marketing company Bidan, which is promoting the film. “Since you can’t expect to earn much by selling DVDs or other products here [because so many people download films for free] the local film industry is looking overseas for other opportunities.”

“Sayonara Itsuka” is a collaboration between production companies in Korea and Japan. Although the film is based on a Japanese novel written by Hitonari Tsuji and all of the actors are Japanese, the film was directed by Lee Jae-han, who made the Korean film “A Moment to Remember” in 2004.

Another blockbuster project is being done by companies from Korea and New Zealand. The film, “The Warrior’s Way,” is being directed by Korean filmmaker Lee Seung-moo. It features Korean actor Jang Dong-gun and American actors Danny Huston and Kate Bosworth. It is slated to open later this year.

Last year, Korean actor So Ji-seob and Chinese actress Zhang Ziyi co-starred in the romantic comedy “Sophie’s Revenge,” which was produced by companies from Korea and China. Another Korea-China project was the drama “A Good Rain Knows,” which stars Korean actor Jung Woo-sung and Chinese actress Gao Yuan Yuan. (See below to read a review of this film.) Meanwhile, artists from Korea and France created a film titled “A Brand New Life” last year, and the movie received a New Voice/New Visions award from the Palm Springs International Film Festival.

To spur this trend, the Korean Film Council is building up its infrastructure to allow filmmakers from diverse countries including Korea to work with industry experts.

“For example, we arrange business meetings between producers from different countries or sign treaties with European countries so that Korean filmmakers can work together with European film industry experts,” said Hwang Dong-mi, a researcher at the council. “By collaborating, they can share markets and move into new markets.”

When asked how Korean film will be defined when more than two countries come together to co-produce a film project, Hwang said that it’s a matter of money and leadership.

“If a Korean production invests more than 20 percent of the capital, or a film is directed by a Korean, or there are some Korean lines, it can be defined as a Korean film,” Hwang said.