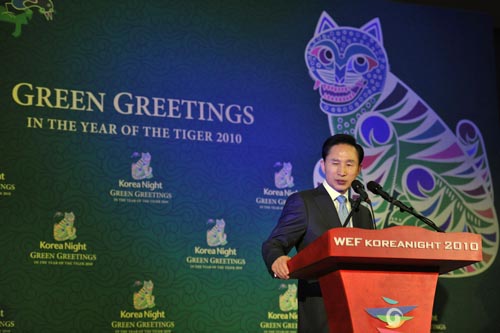 
I recently returned from a trip to France, where I gave a lecture at the University of Le Havre. The trip coincided with the World Economic Forum in Davos, Switzerland. Korea’s case was highlighted at the forum, whose theme was “Improve the State of the World: Rethink, Redesign, Rebuild.” BBC and CNN featured special programs on Korea. Naturally, I spoke about the Davos Forum in connection with Korea’s IT industry in my lecture.

The information technology industry stands at the center of Korea’s emergence in only half a century from an underdeveloped country to one of the major economies in the world, I explained. I also applied the theory of cooperation between the government and the market. The government collaborates with the industry to create a market, leads growth by creating demand as well as supply, and the developed industry cooperates with the government to create yet another market. The economy is growing like a snowball.

A student asked, “I thought Korea was a capitalist country with a market economy system. How can the government take an initiative and lead an industry?”

I explained that the government supports research and development to create a technical foundation and basis, and the industries apply them on the market to create products and services. The government, however, fully supports a system faithful to the theories of market economy.

Another student asked, “Then, the industries would be subordinate to the government’s lead.

Wouldn’t the market economy be restrained and ultimately regress?” His question was sharp. He pointed out the very problem Korea is going through today.

If you look at Korea’s situation of late, you will sense here and there that the existing structure of government-market cooperation has become a conventional cast. When it began half a century ago, it was a good model. But as the economy matured, it has kept the Korean economy in a box.

As the closed market structure is set, industries settle for the status quo and are reluctant to pursue innovation. Another adverse side effect of the government’s powerful influence is that industries are swayed by political considerations. The IT and media industries are in such a crisis now.

Nevertheless, the market-led model is not ideal. We have witnessed that giving excessive initiative to the market can bring on economic crisis. Also, we have learned that sometimes the market’s self-regulating function does not work. Therefore, the cooperation between the government and the market is still valid. The point is the substance.

The old model should not be repeated as is. The government should not just create a blueprint and order the market to follow. The market size has grown, and industries are aiming at the global market as well as the domestic market.

Also, creativity has become more important than planning. Instead of benchmarking a success, we need to lead the changes. We need to break away from the closed structure and transform into an open one.

This year, Korea received the spotlight at the Davos Forum and is hosting the G-20 summit. This means that Korea is recognized as one of the leaders of the global market. Korea could fall into the trap of vanity.

We are going through a very risky period. We need to drastically give up the ways that brought us success in the past. We must rethink, redesign and rebuild the cooperative model between the government and the market. It is no coincidence that world leaders discussed the same topic at the Davos Forum.

*The writer is a professor of communication and information at Inha University.
Translation by the JoongAng Daily staff.