Traditional tastes for the New Year

Traditional tastes for the New Year 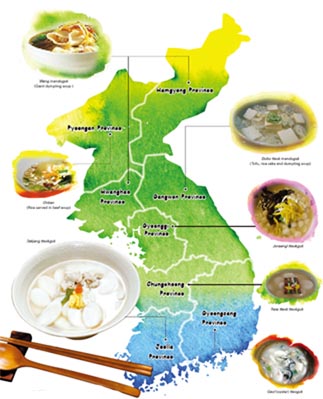 Photo of Dakjang tteokguk by Oh Sang-min. Other images provided by the World Food Culture Center

With Lunar New Year’s Day falling on Feb. 14 this year, there are two foods likely to share the spotlight: chocolate and rice cake soup, better known as tteokguk in Korea.

While chocolate comes in various shapes, colors, degrees of sweetness and kinds of packaging, tteokguk seems - at first glance - to have retained its traditional recipe with little variation. Most bowls of tteokguk have thin, oval-shaped slices of white rice cake, tteok, served in a delicate beef broth.

But tteokguk is more versatile than expected, and there are more than five major kinds of tteokguk from as many different provinces around the country.

“Korea is a peninsula-shaped country with different geographical features and climates according to region, and tteokguk recipes vary likewise,” said Yang Hyang-ja, 53, the executive director of the World Food Culture Center who has been in the food business for 25 years now. She is currently working with the Agriculture Ministry on their project to globalize Korean food. 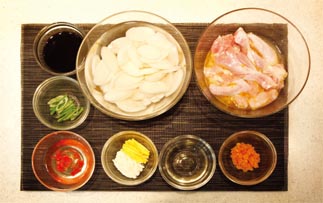 “The northern provinces of the country, such as Pyongan, Hamgyong and Hwanghae in North Korea, traditionally make a variation of tteokguk called manduguk [dumpling soup], while the provinces in the southern part of the country make their tteokguk broth with different ingredients, which gives it a different taste,” Yang added.

Tteokguk is traditionally eaten around the Lunar New Year, and is believed to bring good luck and another year of life to the person who consumes it. Let’s take a look at the five kinds of tteokguk from five different regions in Korea.

Kaesong, which was once the capital of Goryeo, was known to have had a strong culinary tradition. After the 1950-53 Korean War, the province to which the city belonged, Gyeonggi, was divided into North and South, with the city of Kaesong becoming part of North Korea.

Today, the people on the southern side of the border still practice the traditional regional cooking style.

The traditional dish served for the Lunar New Year holiday is choraengi tteokguk. It gets its name from its barbell shape, called choraengi in Korean, there is an interesting folk tale about where the shape comes from.

After the foundation of the Joseon Dynasty (1392-1910), Yi Seong-gye, who is credited as the founder of the dynasty, tried to kill all the men from the preceding dynasty, Goryeo (918-1392), so that they could never retaliate.

When news of the general’s intentions spread, the men of Kaesong began to leave, enraging the women of Kaesong. To blow off steam, the women of Kaesong started making their tteok by breaking off pieces of garaetteok, a cylindrical piece of tteok about 12 inches long, and stretching them into smaller gourd-shaped pieces of tteok that they could then use to make soup. It was said that when the women started using a knife to cut the tteok into pieces, they pretended it was Yi’s head they were cutting off.

In the Chungcheong provinces, tteokguk is often made with pieces of raw, unboiled tteok. Unlike other forms of tteokguk, where the tteok is pre-boiled before it is added to the soup, the broth and raw pieces of tteok are boiled together to make the tteokguk from Chungcheong. This process makes the tteok less chewy when served. The broth contains oysters seasoned with salt or short-necked clams, which gives it the milky-white color that is peculiar to this type of tteokguk.

The Jeolla provinces are famous for their dakjang tteokguk.

“Dakjang” is a portmanteau of the Korean words for chicken (“dak”) and soy sauce (“ganjang”) that refers to sliced chicken boiled in soy sauce.

The dakjang is made in advance and buried in the ground, and it keeps for about 15 days.

“Dakjang tteokguk has a pleasantly salty taste and a slight sweetness, which comes from the flavor of the soy sauce used to boil the chicken,” Yang said. “Dakjang tteokguk, which once seemed to have lost ground to other kinds of tteokguk, is becoming more popular these days. I think that’s due to people’s nostalgia for the oldies but goodies as well as the recent ‘well-being’ trend and revival of interest in traditional food, which is presumed to be wholesome,” she added.

In the Pyongan provinces, they serve “onban,” which literally translates to “warm rice” in Korean, in place of tteokguk. As a dish, onban consists of rice served in beef soup.

To make onban, fill half a bowl with rice and put boiled glass noodles on top. Garnish with toppings such as stir-fried mushrooms, seasoned beef, a beaten egg, thinly sliced red chili peppers and slightly toasted and crushed gim (dried seaweed). Pour the boiling beef broth over the bowl immediately before serving.

Since the dish is already garnished with various ingredients, with each one adding its own flavor, side dishes are not considered necessary when this dish is served, with the exception of kimchi.

People in the Hamgyong and Hwanghae provinces celebrate Lunar New Year by making a soup with large, fist-sized dumplings.

“In the northern area of the country, there are not as many rice farms as in the southern part, so there is a limited supply of rice for making tteok,” Yang explained. “That’s why they make dumplings for festive occasions.”

In the past, tteokguk was actually considered to be a fancy and highly nutritious treat due to the scarcity of white rice, which is the most desired staple food in the country, according to Yang.

The ingredient that makes the tteokguk from Gangwon so extraordinary is simple: tofu. The city of Gangneung is particularly well known for its Chodang tofu, which is said to be seasoned with seawater from the East Sea, instead of salt.

The Gyeongsang provinces, which are near the sea, are known for their oyster tteokguk. Here, the broth is made with oysters instead of beef, which makes for a refreshing taste for those of you accustomed to the beef stock variety. Clams, shrimp and other kinds of seafood are then added to taste. And in some places, anchovies are used to make the broth, instead of the oysters, which are added to the broth later.

1.Place the chicken and garlic in a mixing bowl and marinate for 10-15 minutes.

2.Transfer the mixture to a cooking pot, pour 6 cups of water over the chicken and boil for 10 minutes.

4.Take the chicken out of the pot, remove the bones and tear the meat into small pieces.

5.Put the chicken back into the pot, add 1-2 cups of water, a dash of soy sauce, the garaetteok and the scallions and boil for a few minutes.

6.Put the soup into small soup bowls, adding the egg and red pepper just before serving and enjoy!