Try your hand at this sweet holiday treat

Try your hand at this sweet holiday treat 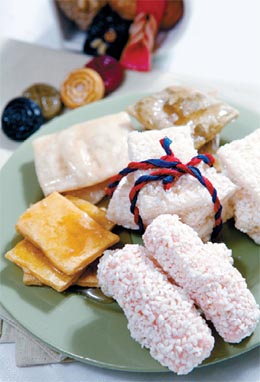 Hangwa, traditional Korean sweets and cookies, come in a variety of shapes and colors. By Oh Sang-min

There are several foods that are always eaten during the holidays in Korea. One of these is hangwa, a general word for various kinds of traditional sweets and cookies. Hangwa is also popular as a gift for families or co-workers.

If you’ve already tasted the hangwa varieties yakgwa (cookies made with flour, sesame oil, honey, rice wine, cinnamon and ginger juice), yugwa (oil-and-honey pastry) and gangjeong (fried glutinous rice crackers with sesame or beans), and are looking for something new, or if you are just curious to know what to eat at this time of year, try Kaesong juak.

Kaesong juak is a traditional Korean rice cake from the Kaesong region in North Korea. It resembles a small doughnut.

“Kaesong juak was originally made for shamanistic rituals as an offering to the spirits to ward away misfortune and bring good luck,” said Yang Hyang-ja, the executive director of the World Food Culture Center. “Juak is now often given as a gift. The mother of a new bride might send it to her daughter’s new parents-in-law after the wedding, for example.”

According to Yang, juak is not difficult to make. If you’d like to try making this traditional treat for your family, friends, or even just for yourself, follow the directions below. 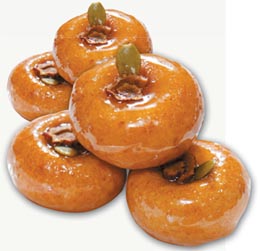 Kaesong juak, a traditional Korean rice cake originating from the Kaesong region, is an uncommon type of hangwa. But with its sweet taste and chewy texture it is a good snack for children.By Oh Sang-min

Ingredients for the syrup: 200cc of grain syrup, 100cc of water, and 10 grams of minced ginger

1.Make the syrup by mixing the grain syrup, water and ginger in a small mixing bowl. Set aside.

2.To make the dough, put the glutinous rice flour, wheat flour and sugar into a mixing bowl, then add the makgeolli and boiling water and mix by hand into dough.

3.Take a small portion of dough and roll it into a ball measuring 3 centimeters in diameter and 1 centimeter thick. With your finger or thumb, make a small impression in the center of the ball and set aside.

4.In a deep skillet, heat the oil to 180 degrees Celsius (350 degrees Fahrenheit). Drop the pieces of juak into the oil and set aside. Reduce heat to 150 degrees and fry the juak again, until golden.

5.Remove the juak and place on a paper towel to absorb the excess oil. Then, dip the pieces of juak into the syrup you made earlier.

6.Garnish the pieces of juak with minced jujubes and pumpkin seeds and enjoy!