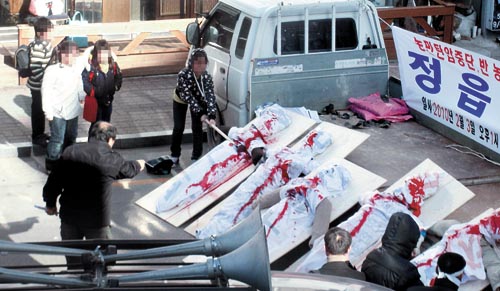 A student pickaxes a dummy on Feb. 3 at a rally organized by a farmer’s group in Jeongeup, North Jeolla. A Jeongeup resident took this photo. [NEWSIS]

The group of farmers from North Jeolla Province received a flood of calls condemning them for having young children kill a man in effigy.

“We offer a sincere apology to Jeongeup residents, elementary school students and parents for causing trouble,” read the statement run by the farmers’ group in the Wednesday edition of the local Jeongeup newspaper. “Our performance was intended to express our anger against the cooperative chiefs, but we hadn’t meant to have elementary school children participate. We will make sure this does not happen again.”

For three months, the group had been protesting the Nonghyup, or National Agricultural Cooperative Federation’s decision to set the purchase price of rice this year at 44,000 won ($38) per 40 kilogram bag - 2,000 won less than the group had demanded. The five chiefs responded that they would go no higher, because for 10 years the cooperative had been paying the farmers more than the rice brought in at market.

On Feb. 3, the protests took on a gruesome hue when the farmers began beating dummies that had been dressed in white cloth and splashed with red paint to symbolize blood. The already grotesque demonstration ran out of control when the students walked by, and some farmers told them to pickax the scarecrows.

The children, all between 8 and 9 years old, desperately and repeatedly tried to refuse, but the farmers insisted they take up the sharp metal pickaxes and stab at the dummies. One student told the press she felt “gross and strange after piercing the dummies several times with the pickax.”

Although adults were passing by and witnessed the incident, none stepped in to help the children.

The farmers’ group said the members went to the students’ school the day after the incident to apologize.