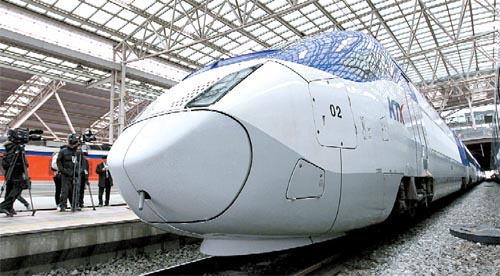 The KTX-II, the first bullet train to be based on homegrown technology, waits for its first trial run yesterday from Seoul Station to Daejeon Station. The train will start commercial routes on March 2 and run four times a day, including from Seoul Station to Busan and Yongsan Station to Gwangju. All cabins are equipped with wireless Internet connections and digital multimedia broadcasting networks. With the KTX-II, Korea will be the fourth country in the world to use its own technology to build a high-speed train. It has a maximum speed of 330 kilometers (205 miles) per hour. [YONHAP]