‘The Year of the Flood’ - a sensation

‘The Year of the Flood’ - a sensation 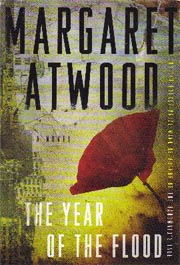 One hundred years from now, it’s likely that our children will look back on this time as a turning point in environmental awareness. Two of the last six Nobel Peace Prizes have been given to eco-activists, including one for Green Belt Movement founder Wangari Maathai. And bookstores have been flooded with pro-environment treatises.

In the midst of all of this tree hugging, it’s fair to ask whether we really need one more lecture on how our rampant consumerism is destroying the planet. Enter Margaret Atwood’s brilliant new novel “The Year of the Flood.”

The book is set in a dystopian future where the world is on the brink of environmental collapse. Powerful corporations called CorpSeCorps dominate the cities and their private security units have replaced police. Gene-splicing scientists make everything from goat-like animals that grow colorful hair for wigs to in vitro meat grown in a lab and never part of an animal.

All the food is processed and most natural areas have been turned into seedy drug havens where corpses with missing organs appear overnight. In the midst of this hell live God’s Gardeners - a religious sect that blends Christianity with environmentalism. Composed mostly of renegades trying to escape CorpSeCorps warrants or unsavory lifestyles, the Gardeners live in isolation at the Edencliff Rooftop Garden. There they raise bees, make their own clothes and soap and are strict vegetarians.

Their eco-conscience ways are both religious duties and necessities. The Gardeners believe that a Waterless Flood is coming that will wipe out most of humanity and restore the earth to its natural state. And when it comes, they have to be ready to live off the land and survive without modern amenities.

As the title suggests, the flood does come and some do better at surviving in the post-apocalyptic world than others. The novel follows two women - Toby and Ren - as they try to deal with their past and accept their wild new world.

Toby, a hard-nosed but reluctant leader of the Gardeners, has spent most of her life running away from things or people who have hurt her. Now, she must face these issues head-on and do the unthinkable to survive. Ren is younger and easily malleable. When we first meet her, she is working as a prostitute at a lizard-themed strip club. She has strayed far from her cloth sack-wearing days with God’s Gardeners and must call upon the things that she learned at Edencliff about thinking like a predator or else become prey.

Atwood calls “The Year of the Flood” speculative fiction rather than science fiction. And despite the mythological allusions, the novel is rooted in reality.

Atwood thoroughly researched the science behind the lifestyles of both God’s Gardeners and the CorpSeCorps. Like her 2003 companion novel “Oryx and Crake,” which features some of the same characters, Flood is littered with references to real technology such as compost toilets and genetically engineered animals. And while the religion of God’s Gardeners is obviously an invention, their saints are not. Dian Fossey, the zoologist who studied gorillas in Africa, is one of the more recognizable ones.

The intersections of Flood with our present reality do not stop there. Since the book’s release last September, the beliefs of God’s Gardeners have gathered a cult following. Folk singer Orville Stoeber composed music for the hymns of God’s Gardeners scattered throughout the book. And on the book’s official Web site (www.yearoftheflood.com), you can calculate your carbon footprint, nominate an inspirational eco-saint and parse through ideas people around the world have come up with to survive the proverbial flood of climate change.

Atwood’s Flood makes it abundantly clear that the era of eco-lit is just beginning. And given the page-turning catastrophe novel Atwood has given us, I can’t wait to read more.

The Year of the Flood