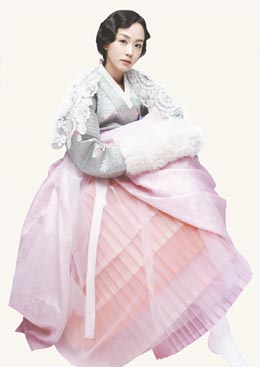 To add a modern touch to traditional hanbok, designer Kim Young-jin makes muffs of mink instead of quilted fabric. By Park Jae-hyung

If you mix and match your everyday look, hanbok designer Kim Young-jin says you can do the same thing with traditional Korean dress.

The 39-year-old designer, who adds foreign fabrics such as lace, tulle, velvet and fur to hanbok, says making the modest traditional gowns gives her a chance to express her wildest imagination.

One of Kim’s creations uses Italian lace to make the jeogori, or upper garment on a wedding dress. The see-through lace gives the hanbok a sexy look. A muff made of white mink, instead of quilted fabrics, and a touch of tulle at the hem of a skirt, are also standout effects.

Traditional hanbok are made of silk, a luxurious enough fabric to begin with. But the costume can be made more dramatic by mixing, say, a glossy silk jeorgori with a skirt of coarse ramie. 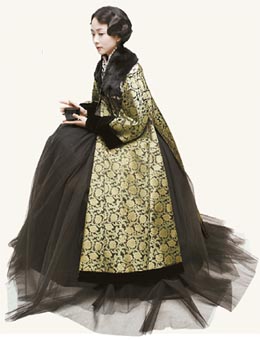 Tulle is used to hem the hanbok skirt, while velvet is used to trim durumagi, or a full-length traditional Korean jacket. By Park Jae-hyung

It might not be what springs to mind as traditional, but “[mixing and matching] is what people did in the past, because then hanbok were the everyday clothes,” Kim said.

“We wear a T-shirt with jeans even though they are not made with the same fabrics.”

Kim believes that layering a hanbok skirt is the best way to emphasize its beauty - and that’s best done by mixing differently textured fabrics.

Her modern hanbok is neither new nor hybrid, Kim says. While most of today’s hanbok are A-line, the archetypal look - tight sleeves and a balloon-shaped skirt - dates back to the Three Kingoms period, well before the Joseon Dynasty.

Kim says Shin Yoon-bok’s paintings from the Joseon Dynasty are proof. The women in Shin’s paintings are clad in tight-sleeved jeogori and balloon-shaped skirts.

No matter how you adapt the look to your personal style, if you’re going to wear hanbok, your makeup needs to be light. The style’s bold patterns and colors match well with a fair complexion. And when choosing colors of eyeshadow and lipstick, match the shade to the jeogori for the most striking effect.