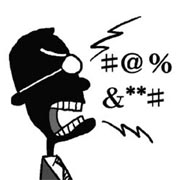 In Chinese, individual letters have both meanings and high and low tones, giving the language an automatic rhythm and melody. This is why shunkouryu is possible. Shunkouryu can be translated as “jokes to the tune of the mouth.” Here are some examples.

One counting rhyme says: “You can’t get drunk with one or two bottles, you can’t get tired after three or four days playing mah-jong, five or six steps feel like flying when you’re dancing, and seven or eight are no problem when dealing with women.”

A wry observation: “Police hats are shaped like fangs on both ends, because they take a bite out of both the victim and the accused.”

The latter is a joke that could not have been told in the days when the Communist Party wielded undisputed power. Mocking party executives was equated with attacking socialism, and making fun of the police was considered an act meant to destroy proletarian dictatorship - and either was enough to send someone to jail.

Shunkouryu only started freely in the 1980s, when China began to open. Reform leaders such as Hu Yaopang quoted shunkouryu to denounce provincial government officials. These days, shunkouryu mostly points out civil servants’ corruption and sloppy management of the government.

“Take immediate action if a beautiful woman is offered, action soon after if just money is offered, wait forever if there is no money or woman.”

“Work starts at eight but arrives at nine, drink a cup of tea and slowly look through the paper, smoke good cigarettes but never buy any, always drink good alcohol but never run out.”

There is also a shunkouryu called “The Four Basics,” modeled after the “Four Basic Principles” outlined by Deng Xiaoping at the National Meeting of the Chinese People’s Political Consultative Conference on March 30, 1979: “Upholding the basic spirit of communism, upholding the people’s democratic dictatorship political system, upholding the leadership of the Communist Party, upholding the thoughts of Marx, Lenin and Mao Zedong.”

Perhaps because we have no shunkouryu in Korea, rough talk is rampant instead. Rough talk is not only heard in the prosecutor’s office, the court and classroom, but in the plaza of public opinion. Recently a critic used the expression deud bo jap, meaning someone nobody has heard of or seen before. It is an expression that omits the most minimal of manners. That critic has been sued and it looks as if he will be fined.

Rough talk is the opposite of discussion. There are only scuffles in rough talk. But the harsher shunkouryu is, the better it is loved. However, there is one condition. Shunkouryu cannot spell out who it refers to. Rough talk is the exact opposite. It takes direct aim at the person being talked about.