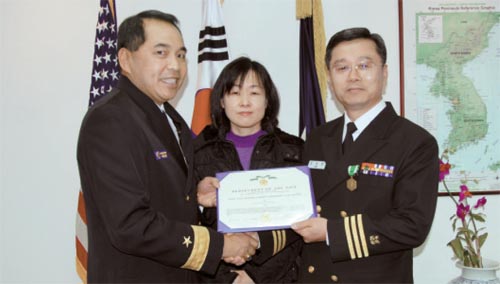 
Korean Navy Commander Cho Deok-hyun, 49, a war history professor at the Korea Naval Academy, was awarded on Feb. 1 with the Navy and Marine Corps Commendation Medal from the U.S. Navy for his contribution to strengthening ties between the Korean and U.S. navies.

Cho was recognized for his work teaching cadets at the U.S. Naval Academy in Annapolis, Maryland.

Captain Peter A. Gumataotao, commander of the U.S. Naval Forces Korea, bestowed the medal on Cho on behalf of the U.S. Navy at the Korea-U.S. Combined Forces Command in Yongsan, central Seoul.

Cho lectured first-year U.S. naval cadets on American naval history, a compulsory subject, as an exchange professor for two years beginning in 2007. He was the first foreign instructor to teach the subject since the USNA was established in 1845.

Eight Korean and six American officers have participated in the exchange-professor program since it was introduced in 1993 between naval academies in both countries.

After being commissioned as an ensign from the KNA in 1986, Cho earned his master’s degree in history at Korea University in Seoul, and received his doctorate in history from Ohio State University in 2002. He was selected for the exchange program while he was teaching at the KNA.

While in Annapolis, Cho lectured the American cadets about Admiral Yi Sun-sin of the Joseon Dynasty and the turtle ship, an ironclad vessel Yi used to defeat Japanese naval forces during the Imjin War. The professor also introduced a Korean history course.

“I am humbled and honored to receive the medal,” Cho said. “I think my efforts to introduce American cadets to Korean tradition and culture have had good results.”