Sung conducts herself well in a man’s world

Sung conducts herself well in a man’s world 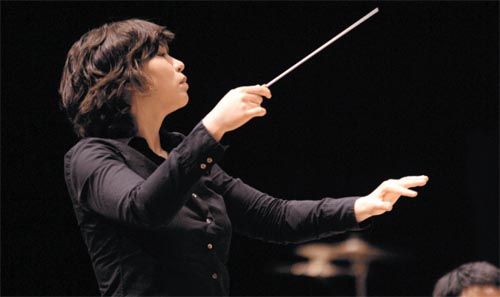 Sung Shi-yeon may be the first Korean woman to become a leading lady in the international music scene.

Sung, who became the first female assistant conductor for the Boston Symphony Orchestra in the United States in 2007, has now taken up the baton for the Seoul Philharmonic Orchestra in Korea. Her most recent success was at the Seoul Arts Center’s Concert Hall last week, conducting Austrian composer Gustav Mahler’s epic work, “Das Lied von der Erde (The Song of the Earth).”

“Being on stage is still like being on a battlefield for me,” said the 35-year-old conductor.

One of her great fights was at the Sir Georg Solti 2006 International Conductors’ Competition. After being chosen as one of 24 finalists among 500 applicants, on the day of the competition she was running late. She was off to a rocky start even before she began rehearsing with the orchestra in front of the jury.

“First, I failed to make correct commands about beats. Then, a couple of the orchestra members began to laugh,” she said.

She yelled at them in letter-perfect German, “Don’t laugh at me just because an Asian woman is conducting.”

When the rehearsal ended, the orchestra lauded her with “Bravos!” Sung took first prize.

Sung had another major “battle” in September 2007, when she conducted the Frankfurt Opera Orchestra, whose members were stubborn about their musical interpretations.

“They were really a strong orchestra,” she said. “And I had only been conducting for 10 years. I could understand why the orchestra members, who had been playing longer than that, wouldn’t want to hear my interpretation. So I realized that I had to learn how to control my emotions as their conductor.” She did, and remembers the performance as one of her best to date.

Sung’s win at the 2006 competition was quickly followed by an invitation from the Boston Symphony Orchestra to become their new assistant conductor. Her stint with the orchestra will come to a conclusion this August.

Last year at the Tanglewood Music Festival, when BSO conductor James Levine’s health was deteriorating, Sung stepped in with a praise-winning performance.

Sung tried harder because she felt she was behind. As a child she played piano, changing her focus to conducting only when she was in her 20s.

“It took a whole day just to get through a page of orchestra music,” she said. “Nowadays, people usually start dreaming about being a conductor and studying to become one when they’re youngsters, but I started a lot later and older.

“Conducting is still a man’s world,” she added. “Even though a female conductor is just as talented as a male conductor, he still has the upper hand. But I think a female conductor would be of more interest to the public. If you are musically inclined, then gender would not and should not matter.”