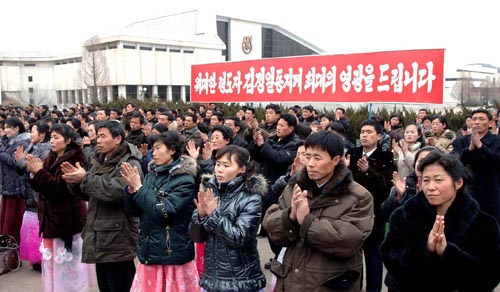 North Koreans applaud Tuesday at a celebration in Pyongyang, as leaders reportedly soothed people who were affected by the currency revaluation. [YONHAP]

With North Korea reeling from the botched currency reform of last year, a powerful government figure has reportedly started leading efforts to clean up the mess.

Quoting an anonymous source in Washington, Radio Free Asia said yesterday that Jang Song-thaek, brother-in-law of Kim Jong-il and a senior Workers’ Party official, recently had extensive discussions with economic experts. During the sessions, which reportedly went on for several days, participants analyzed the causes of the reform’s disastrous failure and brainstormed ways to revive the economy.

The revaluation, the North’s first in 17 years, took place last November on an exchange rate of 100 to 1. It was designed to curb inflation and restrict underground market activities, whereby merchants had stashed their cash at home and virtually severed cash flow.

Instead, however, the reform crippled markets, drove up the price of rice and other goods and led to riots and physical confrontations between civilians and police in some places.

In recent weeks, Seoul-based news Web sites run by North Korean defectors and North Korean activist groups have claimed that in some cities, up to two people a day are dying of hunger.

Last week, North Korean Premier Kim Yong-il acknowledged the reform’s failure and apologized for the rampant inflation. Pak Nam-gi, head of planning and economy at the Workers’ Party, reportedly was dismissed for his role in pushing for the revaluation.

Against this backdrop, Radio Free Asia said Jang and the experts “talked about how to quickly bring the unrest under control and present new measures to manage the economy.”

As North Korea scrambles to dig out of its economic hole, South Korea’s unification minister, Hyun In-taek, on Thursday became the first Seoul official to comment on the currency revaluation for the record.

“It is difficult to be 100 percent conclusive, but I believe the situation is quite difficult [in North Korea],” Hyun said at a meeting of the National Assembly standing committee on unification.

In a separate report submitted to the committee, the Unification Ministry explained that inflation has been one of the side effects of the revaluation. The report also said that in order to reduce these side effects, the North’s government has recently allowed use of foreign currency and eased restrictions on market activities.