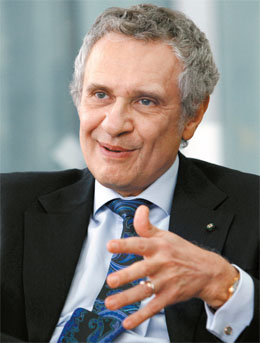 The emergence of the Group of 20 as a premier forum for global governance was timely and effective in countering the recent global economic crisis, but replacing the existing forums of the Group of Seven and the Group of Eight with the G-20 is not a settled matter, Italy’s top envoy to Seoul said.

At the latest summit in Pittsburgh in September, leaders of the world’s richest and emerging economies agreed that the Group of 20 will work as the premier forum of addressing global economic issues. In his interview with the JoongAng Daily, Italian Ambassador Massimo Leggeri carefully stressed that the evolution of the system of global governance has continued for many years and it is still in process. “It’s not closed,” Leggeri said. “It’s not yet decided if the G-20 is the final response.”

“There are two theories. Some say [about the G-20] that there are too many [members],” he continued. “Others say there are not enough. It’s not a question of mathematics. It’s a question of philosophy.”

Leggeri said efforts had began many years ago to operate a G-20 Summit but it was realized only when the global crisis hit countries hard. “Many times in the past, there were efforts to create the G-20 at the leaders’ level, but the idea was never accepted because there was skepticism about inventing another meeting for leaders who are so busy,” Leggeri said. “And then the crisis arrived, and it was useful to have the G-20 structure, which was available at finance minister-level, ready to use.”

Representing Italy, an initial member of the Group of Eight, Leggeri said the G-8 member nations have cooperated closely with the G-20 host nations for past summits.

“It was never the case for G-7 and G-8 to disappear. And in fact, the next G-8 meeting is in Canada in June, coinciding with another G-20 Summit.”

The Group of Eight is a forum created by France in 1975, initially for governments of six nations - France, Germany, Italy, Japan, the United Kingdom and the United States. They were called the G-6. In 1976, Canada joined, forming the G-7. In 1997, Russia joined and the G-8 was born.

Leggeri said the G-8 has also made efforts to reflect the changing situation of the world by inviting non-member countries like China, India and South Korea to join the summits under the mechanism of “outreach.”

Admitting that the international community highly respects the G-20’s role in dealing with the latest crisis, Leggeri said, “Now we have to see if it can continue to work well for exit strategies and then we will see if it can be a place to talk about other issues,” adding that climate change and free trade will be among the issues that require global attention.

During the latest financial crisis, Italy’s banking system did not suffer serious damages because the country has a conservative tradition in the finance industry. “Sometimes, a grandmother approach is the best one,” Leggeri said. “And in Italy, differently from other countries like the United States and Korea, private debts are not so high. We have been criticized for that, because in modern times, you have to work on credit cards. But Italian families are still attached to other kinds of value, and it was fortunate in this case.”

Italy’s business community, however, suffered because banks were too cautious to provide money to industry, which is traditionally based on small and medium enterprises.

“So the government is working to resolve that,” Leggeri said, adding that Italy is also happy to see the forecast that its gross national product will show an increase next year. The key for Korea’s success in hosting the Group of 20 Summit in November will depend on two things - agenda setting and event organization - Leggeri said, referring to Italy’s past experiences of G-8 Summits.

“I have been here for more than three years, and I have seen many international meetings, symposiums, sports events and conferences, both public and private,” Leggeri said. “Korea is perfect in its own way to organize, because it has the structure, the capability and money.”

Leggeri also said the G-20 Summit will be an important opportunity for every Korean person and Korean enterprise. “It’s a big job, and Italy gives its full support. We will respect Korea’s logistics rules and try to be helpful in agenda setting,” he said.

The Italian ambassador also expressed high hopes for the further growth of Korea-Italy economic relations with the Korea-EU free trade agreement. While Korea and Italy have strong trade ties, investment ties are still weak, he said. “Why? Because we send investment somewhere else,” Leggeri said. “Italians are particularly attracted by markets in China, India and Vietnam. Korea sends investments to Eastern Europe such as the Czech Republic and Poland for reasons you can imagine.”

Leggeri said both countries should make more investments in each other because it will be an opportunity to open doors to regional markets.

“By working with Koreans, Italians can sell around Northeast Asia and beyond. Entering Italy with investment is a door to Europe,” he said, adding that the issue will be addressed when an annual forum between Italy and Korea takes place in Milan in March. “This will be an opportunity to mention the issue of investment and try to build a stronger Italy-Korea business route for important industrial groups of the two countries.”

Noting that there are only about 200 Italians living in Korea, Leggeri said he has also tried to promote Korea to Italy and Italy to Korea. ”

Leggeri said Koreans have a good understanding of Italy, but his homeland is known for many things which are not always the most important. “Everyone knows about fashion, food, wine, but not everyone knows about Italy’s high-tech and machinery [industries],” he said. “Everyone knows opera, but nobody here knew Italian jazz. So, we presented Italian jazz several times in Seoul music festivals. It’s a little challenging, but I am working.”