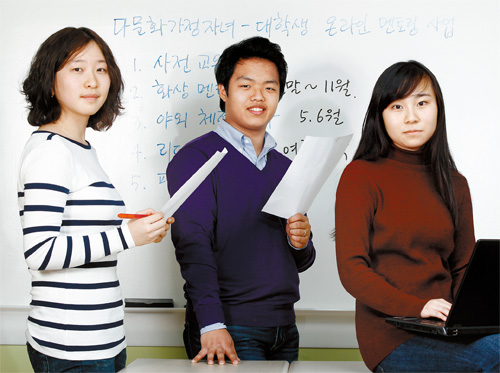 Left to right, Kim Eun-joo, Cha Bong-kwon and Chun So-hee come from multicultural homes and are set to participate in an online mentoring program for children who come from similar backgrounds starting next month. By Jeon Min-kyu

Cha Bong-kwon, Chun So-hee and Kim Eun-joo represent a new generation of Koreans. The youthful students, eagerly awaiting the start of their freshman year at Dongguk University next month, are like any other Korean teens their age.

Cha is set to embark on an undergraduate program in electro-mechanical engineering. Kim is working part-time and preparing to study philosophy, culture and ethics. And Chun has her sights set on international commerce.

What sets these three apart from thousands of other recent high school graduates is that they come from multicultural homes, and are about to become the first from that background to help multicultural elementary school students in one of a growing number of mentoring programs.

Chun and Kim were born to Korean fathers and Japanese mothers, while Cha was born to a Korean father and a Filipino mother. The online mentoring program in which the three will participate is run by the Center for Multicultural Korea (CMCK). Set to start next month, the program is geared toward helping students in the third through sixth grades.

“Children can be sensitive and have many worries. This can be especially true for some multicultural children. Hopefully I can be of help by listening to their concerns,” Cha says. “I didn’t go through an identity crisis, but went through a period wherein I hung out with the wrong crowd in middle school. I was able to redirect my focus as I found an area of interest in high school.”

Because his father works in electro-mechanical engineering, Cha took an interest in the field at an early age, later attending Seongdong Technical High School in Heungin-dong in central Seoul, but what really galvanized his passion for it was the silver medal he won with a partner in an annual city-sponsored contest. Competing against other technical high school students, Cha gained the confidence he needed to work harder in school. He immersed himself in his studies and is on course to achieve his two goals: to serve honorably in the Marine Corps and to earn a degree as an electro-mechanical engineer. 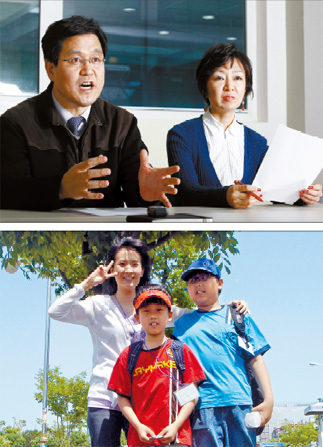 Top, the Center for Multicultural Korea’s Secretary General Kim Sung-hoe, left, sits with the center’s research director, Lee Hyun-jung. By Jeon Min-kyu ; Above, participants in the CMCK mentoring program pose at a picnic in Ansan, Gyeonggi, last summer. Provided by the CMCK

Chun was born on Jeju Island, shortly after which her family spent three years in Nagoya, Japan, before moving to Seoul. Hoping to become a high school teacher, Chun says she wants to be a comforting older sister to the student she is assigned.

“I have two younger brothers in grades four and six, and although it can’t be the same, I will approach it as if helping and spending time with my younger brothers,” Chun explains. “It’s important for people to have an open mind and be more understanding of multicultural homes. In order for that to happen, it’s important to provide a platform for multicultural families and newcomers to Korea to mingle with others outside of their group.”

Kim was born and raised in Seoul except for a year of kindergarten in Tokyo. She once dreamed of becoming a flight attendant and traveling the world but now hopes to work as a translator or in commerce. She agreed with her peers on the need for greater opportunities for Korean people to become aware of different cultures.

“People need to realize that multicultural children are not any different from others in Korea. [A lack of understanding comes] mostly because people lack contact with other cultures, but once they spend time and get to know people outside their group, they come to the realization that they are not much different,” she says.

The CMCK’s - and Korea’s - first mentoring program for multicultural children took place from March to December last year in Gyeonggi. A total of 100 university students from the capital region took on one multicultural student each, making weekly visits to their homes. While the program was a success, the CMCK came across several problems in their first year.

“We chose to focus on the Gyeonggi area because it had the highest number of multicultural children. But the commute for many students was too much, and we also had many students lose interest and drop out after a certain point in the program,” says the center’s Secretary General Kim Sung-hoe.

In order to make up for these shortcomings, the CMCK decided to work with the Multicultural Education & Research Center of Yeungnam University in Daegu, which was established in November 2009, on another groundbreaking plan: online mentoring using webcams and headsets. This trial run of a system new to Korea will, organizers believe, help them to reach out even to multicultural children in Korea’s rural areas.

“It is difficult for many of the students in provincial cities to gain access to tutoring help from university students, let alone those from Seoul. With this new online program, hopefully we can reach out to a broader range of areas in the future,” said Lee Hyun-jung, the research director at the CMCK.

This year’s online program will target the 1,746 multicultural students who, according to the Ministry of Education, Science and Technology, live in Daegu and North Gyeongsang.

The Yeungnam University center hopes to provide the majority of the student mentors, offering course credit and a special certificate to those who complete 32 hours of one-on-one online mentoring and various outdoor activities such as visits to museums, picnics and camping. Though also held last year, the organizers say those activities will be even more important this year since they will be the only organized time for the two groups to come together and interact in person. 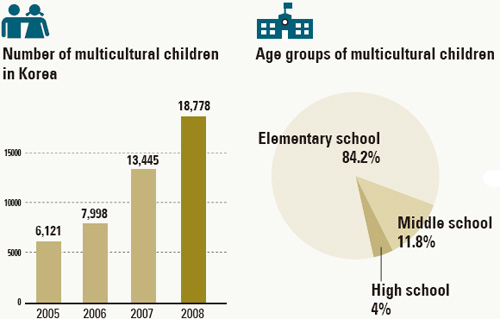 With the help of several sponsors, the two centers were able to raise more than their estimated 142 million won ($122,830) in costs to run and buy equipment for the program.

“We currently have about 20 percent of the mentor positions filled and will finalize the recruiting process once students return to school in March for the spring semester. We have targeted those studying for careers in early childhood education and education-related fields as our potential mentors,” says Kim Eun-yun, a researcher at Yeungnam University’s MERC.

“Support for multicultural families is still sorely lacking at this point,” Kim adds. “One of the biggest problems is the lack of educational support for these children. We are potentially losing out on an opportunity to cultivate bilingual multicultural leaders for this country.” 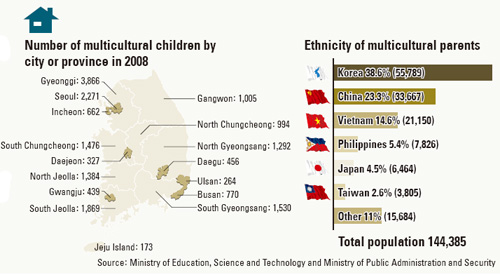 The two centers are not alone in their concern. A growing number of cities outside Seoul, including Busan, currently offer one-on-one mentoring for multicultural children. The Education Ministry has even started its own program with the Seoul National University of Education. The largest of its kind in Korea, the ministry-sponsored program currently has 2,600 tutors working with elementary school students in the Seoul and Gyeonggi area.

Korea’s demographics show the demand for these services, with the country fast becoming a multicultural society. According to the Education Ministry, there were 6,121 multicultural children here in 2005, but that had increased to 13,445 by 2007. The number more than doubled once again to an estimated 28,000 in 2009.

The low birthrate and aging population are also contributing to an increased number of immigrants and newcomers to the country. Center for Multicultural Korea figures show roughly 21 percent of the total Korean population will be immigrants or part of multicultural families by the year 2050.

Despite this rapidly growing diversity, Korea has so far been ill prepared for the changes, and one of the biggest concerns is the failure to provide social and cultural services to accommodate multicultural children. Most alarming is that, according to the Center for Multicultural Korea, roughly 70 percent of children from multicultural homes in Korea now fail to advance to high school or drop out.

“The problem stems from the fact that many multicultural families in regional areas are in the low-income bracket of society and often can’t afford to send their children to hagwon [private educational institutions],” says Kim at the Center for Multicultural Korea.

“Another big problem for the students is that they are often shunned by peer groups and fail to adapt to school life due to teasing.”

According to Kim and Lee, Korean children need just as much education as their multicultural classmates. Full ethnic Korean children are not being prepared for the large influx of newcomers, which often leads to them casting aside kids they don’t understand.

“We dealt with kids who were withdrawn and had violent temperaments at our outdoor camp event last year. Several media outlets were there to cover the event, and we had a few kids who lashed out in anger at the cameramen for being filmed,” says Lee. “However, after spending some time with their mentors and our camp counselors, they opened up and were noticeably better.”

Professor Choi Jin-young at Ewha Womans University led 80 of her students on a one-on-one mentoring program last year for a semester and is currently preparing for a second run this year.

“Elementary-aged children do not necessarily go through an identity crisis. They are not yet old enough to recognize such issues. Some might, but it’s not a big problem for most,” Choi says. “However, educational and mentoring support for children is important in that when proper support is not provided at an early age, it could potentially foster such feelings in these students at an older age.”

As Chun and Kim explain, it is important for people from different backgrounds to interact more and to maintain open minds. But Cha says he sees another reason some of the stereotypes surrounding multicultural homes still linger.

“Not all multicultural families are like that. Such reports can help cement a negative image in the minds of the people.”