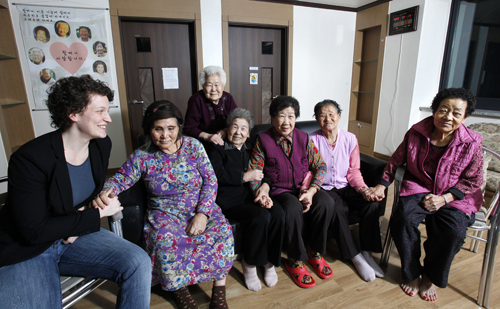 Eighty-two-year-old Kang Il-Chul waddles across the floor impersonating one of the grandmothers living at the House of Sharing. Everyone in the room, including Heather Evans, bursts into hysterics.

As the night wears on, Evans, 29, rests her head on another grandmother’s lap as they intently discuss who in the house makes the best Chinese cuisine. They hug, hold hands, whisper and giggle. Evans smiles and blows a kiss, joking with the halmonis [Korean for grandmother]. Evans cannot imagine her life without the House of Sharing grandmothers.

“I feel like the best moments are just when I get to spend time with the grandmothers ... they are some of my best friends,” she says.

Watching them, it’s easy to forget that Evans is at the house as a volunteer, working to help the grandmothers gain recognition that they were forced into sexual bondage and brutally abused by the Imperial Japanese Army some 60 years ago.

By means of kidnapping, deception and colonial authority, women and girls throughout Asia and even Europe were forced to serve as sexual slaves for the Japanese military between 1932 and 1945. It is estimated that as many as 200,000 young girls and women were beaten, raped, tortured or murdered in the government-run brothel system.

Taken to locations in China, Cambodia, Manchuria and Indonesia, some women were forced to service as many as 30 soldiers per day. At the end of the war, these women who provided “comfort” for the soldiers were abandoned or massacred to conceal the Japanese war crimes.

The first comfort woman to speak publicly came out to the press in 1991, and sparked a movement to have the Japanese government admit its involvement in the atrocities. The House of Sharing was formed as a refuge and place of activism for the survivors.

The house, nestled amid a retirement village in Gwangju, Gyeonggi, is both a retirement home for the halmonis and a place where they can testify about the wrongs they suffered at the hands of the Japanese.

Eighty-three-year-old Yi Ok-seon was kidnapped as she walked down a road, taken from her town and forced into slavery. During the next years, she says she and the other women with whom she shared a barracks weren’t even treated as human beings.

“We were valueless. We were packages thrown to the [Japanese] military forces,” she says. And, angrily, “Look now. The Japanese government denies the wrongdoing and they deny they forcefully took Korean women.

“I aged without memories of my hometown and my parents,” Yi says. “[I know] they killed at least 30 Korean comfort women in the Myanmar borders, and they deny it. They should come here and kneel down for an apology to us.”

Evans says the Japanese instituted the comfort brothels after the embarrassment of the Rape of Nanjing, in an effort to keep their soldiers under control. The scope of the crime is still under intense debate in Asia, and Evans says a key element of her work is bringing people to the House of Sharing so they can hear the testimonies of the halmonis firsthand.

The house’s general manager since 2001, Ahn Shin-kweon, believes that the International Outreach Team, which Evans heads, plays a decisive role in spreading awareness about this tragic history to a Korean and international audience.

“[The volunteers] are the energy of the House of Sharing,” explains Ahn. “They spread the word about comfort women to foreigners. Even foreigners who have lived in Korea for several years have very little knowledge about this issue and would find this job very difficult.

“There are still many people who are ashamed to disclose their dark past to others,” Ahn says. “Because Korea has been a conservative country for a long time, popular sentiment made it hard for the grandmothers to convince people that they were forced to become comfort women.” Some, she says, told the secret only on their death beds.

When the Korean government began to register victims of Japanese sexual slavery in 1992, only 234 women came forward. Today only 87 are alive, of whom nine currently reside at the House of Sharing.

At the suggestion of some Japanese tourists who visited the house, a privately owned museum to commemorate the survivors was established there with donations in 1998. The museum exhibits pictures, records, and visual displays, and has had more than 2,500 visitors from Germany, the Netherlands, Japan, Philippines and Taiwan since it opened, Ahn says.

The price of sharing

However rewarding the work, for Evans there is an emotional toll.

“I read an article recently in a science magazine which said that when people retell memories of trauma they relive the trauma over in their nervous system,” she says. “I feel like I was traumatized the first time I heard it, traumatized the next few times, and now it is just like reliving it and reliving it. I don’t think you grow a thicker skin from it all but you come into acceptance so that it is less of a shock.”

Evans first came to the House of Sharing shortly after coming to Korea to work for a publishing company in 2002, a job she still holds. After settling into her new surroundings, she caught sight of a newspaper advertisement for English-language tours at the house.

“I read a bit about the house and then wanted to go see what it was all about. And I went with the intention of helping in any way I could,” she says. She soon saw that they needed a lot of help.

“I have a background in working with women who have experienced violence on different levels, so this was not a huge jump,” says Evans, who wrote her undergraduate thesis on “Los Desaparecidos,” the people who disappeared during Argentina’s Dirty War.

“Human rights have been a key passion in my life,” she says. “I am always interested in the silenced voice that is being oppressed and it is a passion of mine to give a voice to those who are silenced.”

But it’s difficult to give a voice to those whose language you don’t speak. After completing her training in 2006, Evans was well versed in the historical and political aspects of the House of Sharing, but it would take much longer for her relationship with the grandmothers to develop.

“I think it is difficult, unless you speak Korean, to let them know why you are there and become familiar with them on a personal basis.” For a long time, she says, she was known simply as the Red Car Girl, because of the vehicle she drove.

But the talented linguist improved her Korean and eventually won the halmonis’ affections. Today, the grandmothers even squabble over who gets to spend the most time with her.

Evans says that despite the sadness surrounding the halmonis, volunteering at the House of Sharing is rewarding in the most unimaginable ways. Volunteering, she argues, is paradoxical in that it can be very selfish to derive so much pleasure from an act meant to improve the lives of others.

Her work, however, has paid off for them as well. The grandmothers are thankful for all that has been done by volunteers such as Evans.

“I’m praying goodwill for Heather,” says Yi, as she squeezes Evans’ hand tightly. “I’m grateful because she doesn’t forget the House of Sharing and comes to see us on a regular basis. .?.?. I’m praying for her and will continue praying for her future husband, their child and their grandchildren through generations even as I close my eyes.”

Evans said that the Outreach Team’s mission now is to create an education packet in multiple languages for overseas schools. Currently Japanese schools are discouraged from teaching about comfort women and the atrocities committed by the Japanese army, and Ahn says schools in many other countries simply do not have the materials to teach students about it.

On April 11 in Insa-dong, the team will show the documentary “63 Years On,” which looks at the lives of a number of different survivors of the Japanese comfort stations from all over the world. And two weeks ago, Evans was a guest speaker at the American Women’s Club of Korea’s monthly morning tea.

“I had no idea of the magnitude or scope - how far across Asia it spread and how many women were involved,” said Laura Everett, who attended the lecture. “It is really sad that these women still feel shamed by what happened when it wasn’t their fault, and to think that the [Japanese] government hasn’t made any recognition is disappointing.”

Evans explains that foreigners from Western nations have particularly strong reactions to the comfort women’s situation because of their more liberal understanding of women’s rights and humanitarianism.

“I was shocked at how little the international community knew about the issue,” says Evans. “I just wanted to make the connection because I knew it would be easy to do once we got started.”


This article was written with the assistance of staff reporter Kim Mi-ju.